You Are Here: Home → 2022 → April → 19 → Presidential candidates’ stand on the West Philippine Sea and beyond

Presidential candidates’ stand on the West Philippine Sea and beyond 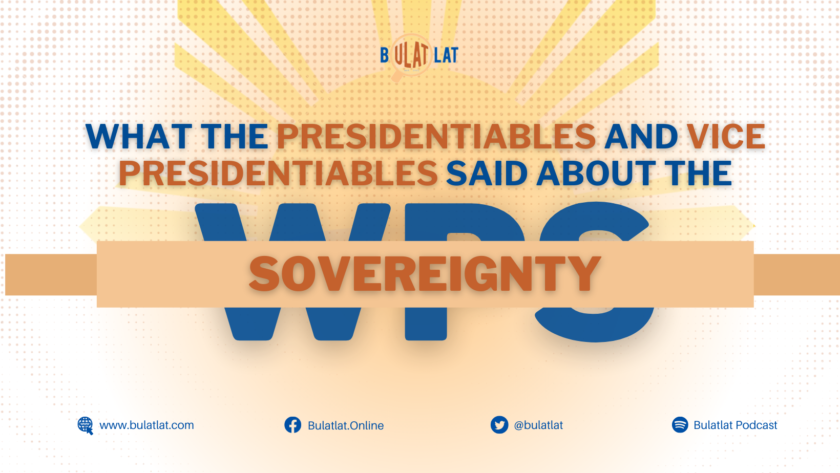 MANILA – Around this time six years ago, the then-presidential candidate Rodrigo Duterte said he would jet ski to the disputed West Philippine Sea to plant the country’s flag on one of the islands there. He would later say it was a campaign joke but the fisherfolk of Zambales did not find it funny – most especially because it spelled hunger for them.

“The Scarborough Shoal did not only provide us with big fish to catch. It also protected us from storms. Once you are inside the chain of reefs and you have anchored the mother boat well, you are safe. But now, we cannot go there anymore,” Bobby Roldan, a fisherfolk in Zambales and vice-chairperson for Luzon of fisherfolk group Pamalakaya, told Bulatlat in an interview.

There used to be about a hundred mother boats carrying five to 10 smaller boats from the Zambales towns of Masinloc and Santa Cruz and Pangasinan’s Infanta that fish in and around the disputed lagoon. Here they would stay for at least two weeks to a maximum of one month as getting to the Scarborough Shoal would take about 18 hours.

Before the tension in the West Philippine Sea intensified, a week’s worth of fishing would provide each fisherfolk about $100 to bring home to their families. Nowadays, coupled with the prices of oil incessantly rising, they can only earn $4 per day.

This, according to Philippine authorities, is a violation of international regulations to prevent collisions at sea.

“What hurts us is the irony that it is as if we are thieves in our own fishing waters. Our fellow fisherfolk try their best to keep distance from Chinese vessels, just to keep the tension from rising,” Roldan said.

As such, fisherfolk would like to see concrete plans and solutions to address their plight in the next administration.

All presidential candidates see the importance of exploring and harnessing the resources in the West Philippine Sea, particularly oil as it can bring down the price of electricity in the country. All of them also agree that the country cannot afford to go to war, adding the need to form and build alliances with countries with strong military forces. 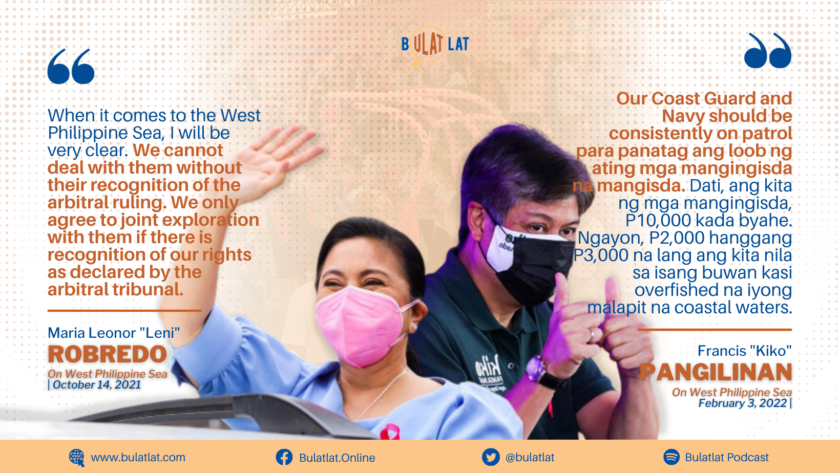 Only Vice President Leni Robredo said that when it comes to the West Philippine Sea, she would agree to a joint exploration with China “if there is recognition of our rights as declared by the arbitral tribunal.”

In 2016, the United Nations Permanent Court of Arbitration (PCA) ruled in favor of the Philippines in its case against China in maritime entitlements in the West Philippine Sea. Its five-member panel ruled that China has no legal basis to claim historic rights to resources within the West Philippine (South China Sea), on the grounds of its “nine-dash line.”

In their public pronouncements and past interviews, presidential candidates Robredo and Sen. Panfilo Lacson and labor leader Leody de Guzman cited the importance of the arbitral decision on the West Philippine Sea. The vice president, in an interview early in 2022, said it can be used as a leverage to gather and unite a coalition of nations to stop the militarization of the disputed waters, while Senator Lacson said that while it is not enforceable, international pressure is important to pressure the losing party to comply. 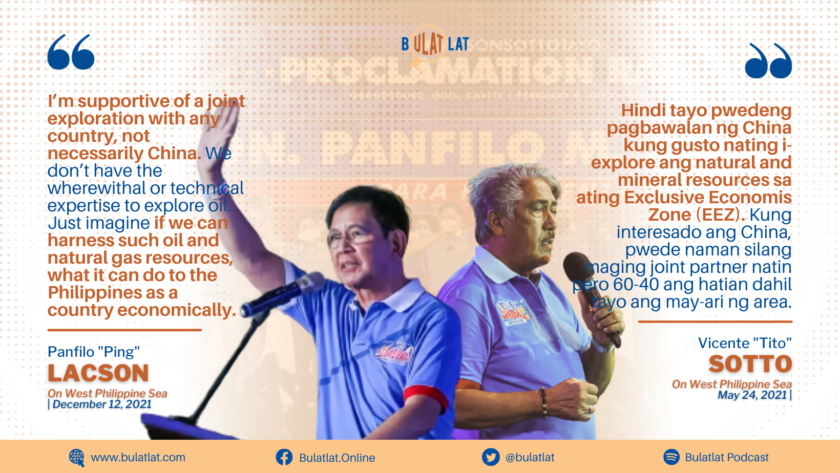 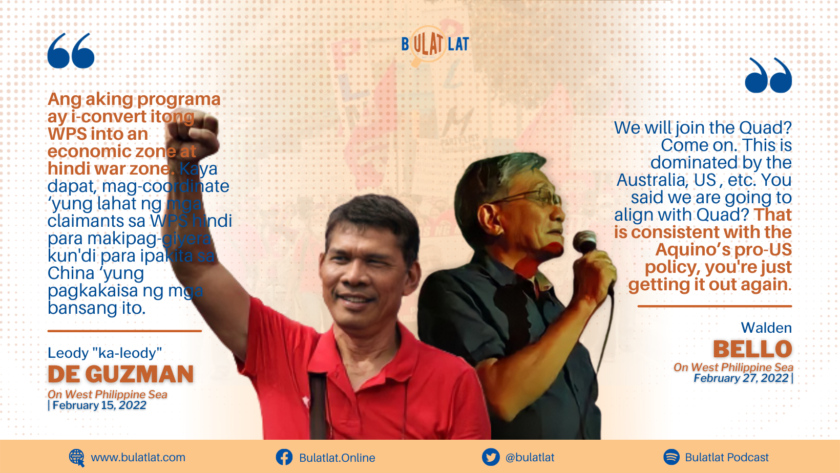 De Guzman said the coordination among country-claimants is not to challenge China to war but to show unity and respect.

Manila Mayor Isko Moreno, for his part, said he is open to a joint exploration initiative with China as long as it is done through service contracts awarded by the Philippine government, adding that it is similar to “regular contracts” entered into with other countries.

Sen. Manny Pacquiao highlighted that we cannot be bullied in our own territory. He added that dialogue is very important so that China will take the Philippine government seriously. 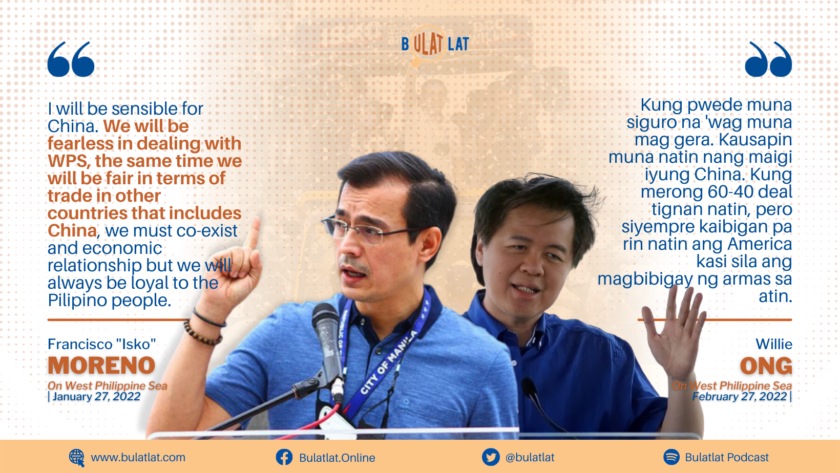 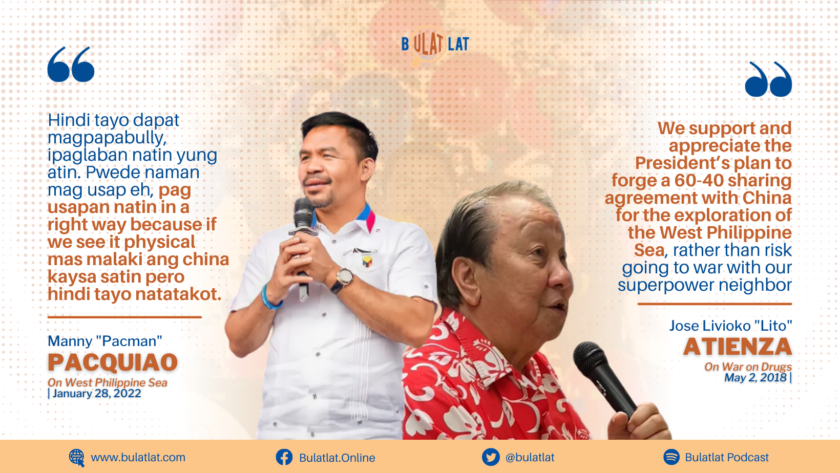 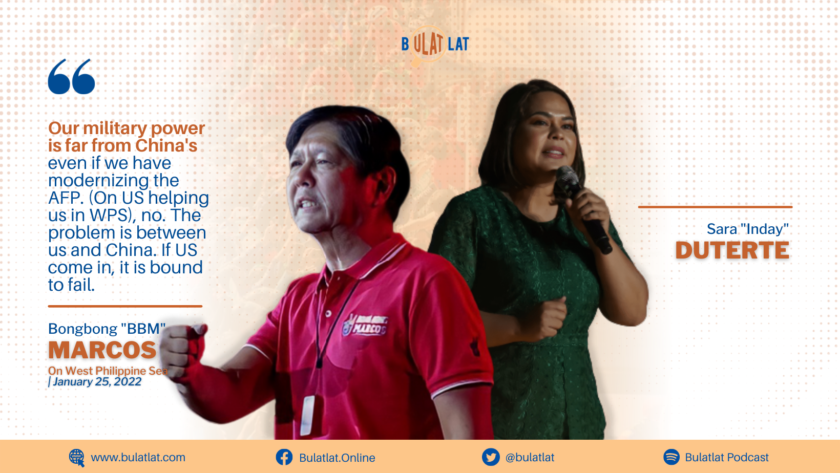 Former senator and son of the late dictator, Ferdinand Marcos Jr. said diplomacy is the “only option that we have.”

Roldan, who also fishes in the municipal waters, said that apart from the rising tension in the West Philippine Sea that is affecting their livelihoods, they are also confronting the impacts of oil price hikes.

Without Scarborough Shoal, fisherfolk need to fish farther into the sea, which means they need to spend more on diesel. They are also struggling with their catch as their traditional means of fishing are a no match to big commercial vessels in the area. For those fishing in the municipal waters, fisherfolk need to catch at least 20 kilos to make at least $2 to $4 a day as a big chunk of their earnings go to oil expenses.

They are also constantly facing death threats as those fighting for the rights and welfare of fisherfolk are constantly red-tagged and harassed.

“This affects us. Red-tagging scares us. But the fear fades eventually once we hear the grumbling of an empty stomach. We have to move and act for our best interest,” Roldan said.

This election, Roldan said, is an opportunity for them to be heard. From the local to national elections, he said they make sure that they are able to engage those seeking to get their votes. And should these politicians win, fisherfolk will hold them to account and make sure that these promises are campaign jokes no more. (RVO)