In the recent 2022 National and Local Elections, 56 party-lists have a chance to garner a seat in the 19th Congress based on Comelec’s unofficial, partial results as of May 13, 2022.

By DOMINIQUE FLORES and RAEVIEN PINTANG
with reports from Marian Abio and Leila Magno
Bulatlat.com

MANILA – Instead of providing genuine representation for marginalized sectors, the party-list system has become a tool for political clans to remain in power. The provision of the Party-list System Act allowing national and regional parties and organizations to run has made it difficult for groups representing the disempowered to gain seats in Congress. 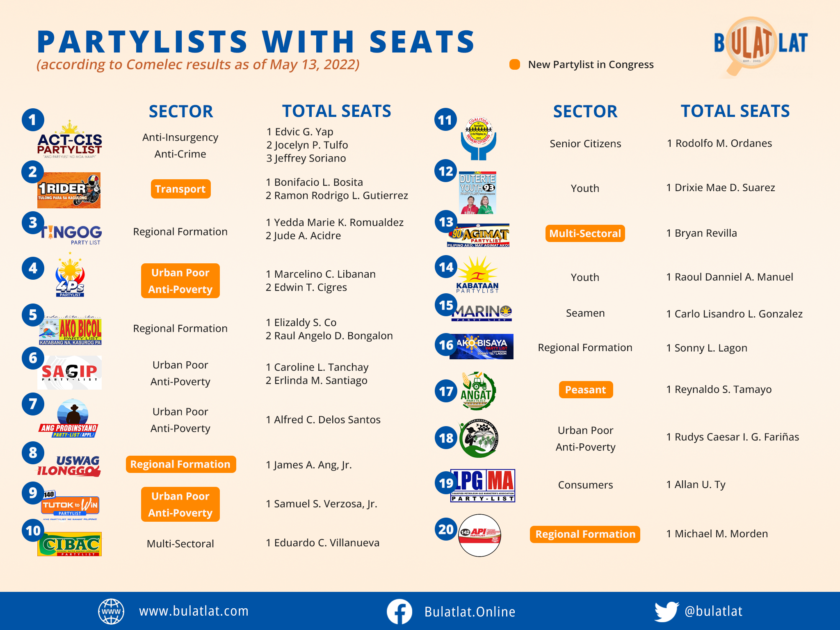 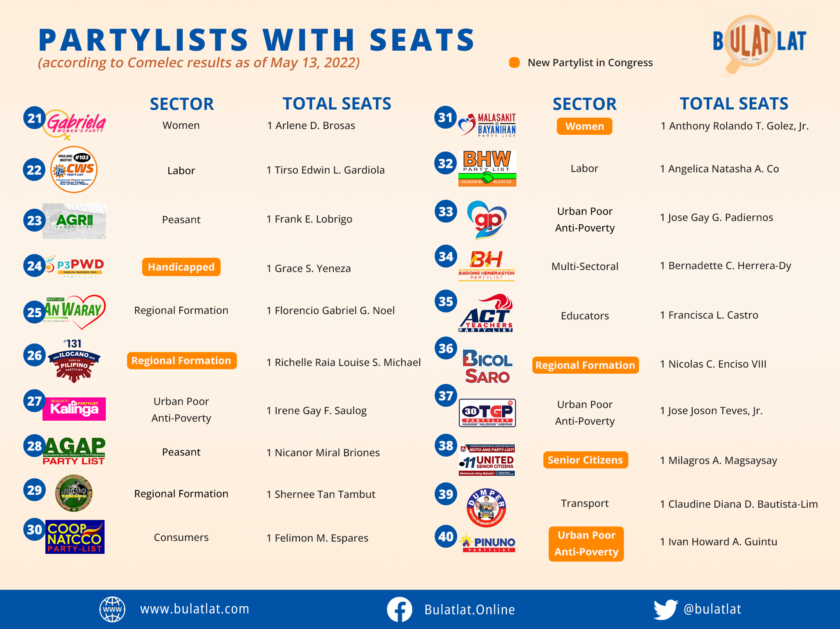 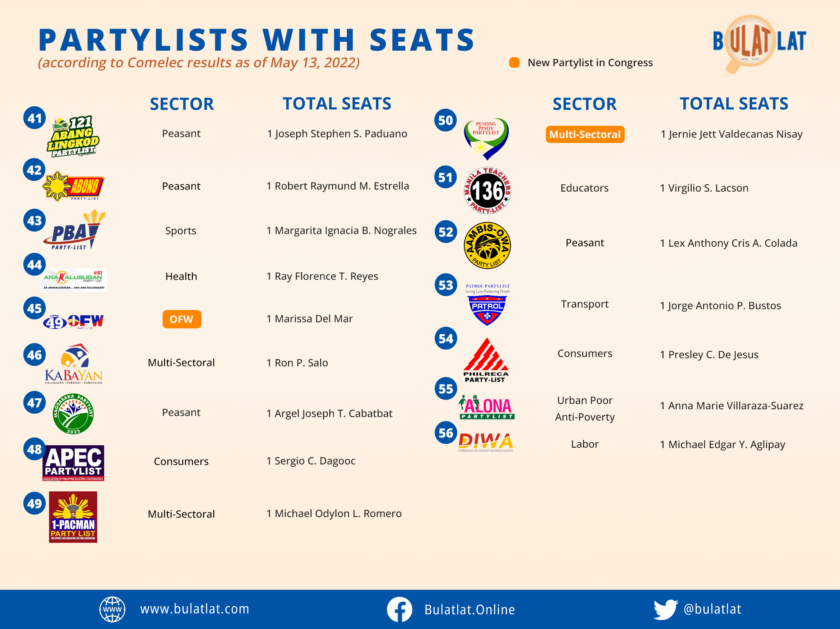 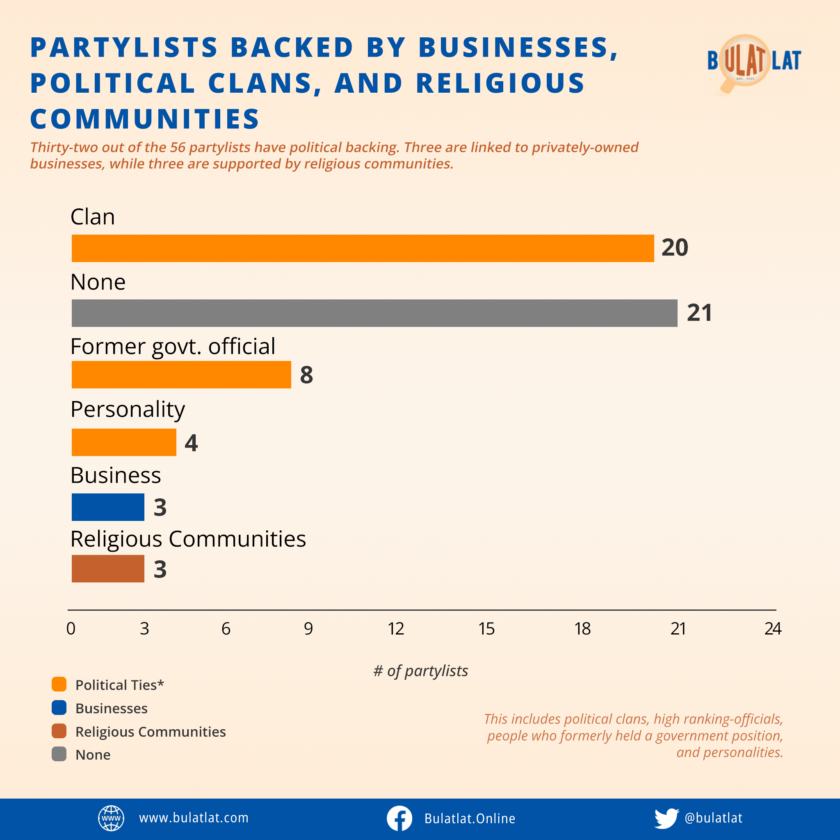 Of the 56 party-list groups, 20 have nominees coming from political clans, another eight nominees previously held other government positions, while four have nominees linked to famous personalities.

Here are the leading party-lists and their affiliations with political clans:

4PS
The first nominee of the party-list is former Eastern Samar congressman Marcelino Libanan, who is one of the involved local officials in a fertilizer fund scam involving P6.1 million.

Tingog PL
The party-list is led by Yedda Marie K. Romualdez, the wife of Martin Romualdez who is the cousin of Ferdinand Marcos, Jr. Martin Romualdez is eyed by his allies to become the next speaker of the House of Representatives.

Probinsyano Ako
This party-list has ties to the Fariñas family of Ilocos Norte. First nominee Rudys Caesar Fariñas is the son of former Congressman Rudy Fariñas. His brother and sister are also incumbent LGU officials.

AN WARAY
An Waray first nominee Florencio Gabriel Noel is the spouse of incumbent and representative-elect Josephine Veronique Lacson-Noel of the lone district of Malabon. Their son Nino Lacson-Noel also won his reelection bid as first district councilor in the same city.

AKO ILOCANO
The party-list will have one seat in the 19th Congress but both first and second nominees, Richelle Raia Louise S. Michael and Allen G. Singson, are children of Ilocos Sur Mayor Luis “Chavit” Singson.

DUMPER PTDA
This party-list is led by Claudine Diana D. Bautista-Lim. Her father, Claude Bautista, was elected in 2016 as the first governor of the country’s newest province, Davao Occidental. LGU officials in the province include her uncle, Vice Governor Franklin Bautista, and her aunt, Lone District Rep. Lorna Bautista Bandigan. Members of the Bautista family also held government positions in Davao del Sur prior to the foundation of Davao Occidental in 2013.

Bautista-Lim also made headlines in 2021 for her Balesin wedding.

ANAKALUSUGAN
ANAKALUSUGAN was represented in the 18th congress by Mike Defensor. He ran for mayor of Quezon City in the recent elections.

ALONA
Anna Marie Villaraza-Suarez also represented ALONA in the 18th congress. She is the spouse of incumbent Quezon Province Second District Rep. David Suarez. Suarez is also the incumbent representative and served as Quezon governor from 2010 to 2019.
DIWA

Politicians with past positions in government, though not from known political dynasties, also ran for another term through several party-lists groups.

ABONO
First nominee Robert Raymund M. Estrella served as a representative of Pangasinan’s sixth district from 2001 to 2010. He was among the 23 representatives named in the pork-barrel scam in 2013, allocating P97 million in bogus projects.

Galing sa Puso (GP) Party
The first nominee of the GP Party, Jose Gay G. Padiernos, served as the vice governor of Nueva Ecija prior to his election to the 18th Congress. The party-list’s second nominee is Raymond M. Umali, whose brother Aurelio M. Umali serves as the incumbent Nueva Ecija governor.

BAGONG HENERASYON (BH)
Prior to being elected to Congress, Bernadette C. Herrera-Dy served as a councilor of Quezon City from 2001 to 2010.

TGP
The party-list’s Jose Joson Teves, Jr. served as vice governor of Catanduanes from 2010 to 2016.

MANILA TEACHERS
Manila Teachers’ first nominee Virgilio Lacson was a councilor of Malabon City in 2001 but was later dismissed from service due to a prolonged absence without official leave, which spanned for eight months. He served in the 18th Congress as representative of the party-list.

Several party-list election winners have ties to entertainment personalities and business people, whose popularity and resources were apparently used to favor them in the last elections.

ACT-CIS Partylist
The Anti-Crime and Terrorism Community Involvement and Support (ACT-CIS) Partylist was endorsed by the Tulfo brothers Erwin and Raffy Tulfo, the latter placing third in the senatorial race. ACT-CIS topped the 2022 party-list groups, a feat they also achieved in 2019.

TUTOK TO WIN
TUTOK TO WIN’s first nominee, Samuel S. Verzosa, Jr., is the CEO of Frontrow, a multi-level marketing company in the health, beauty and wellness industry. Willie Revillame backed the party-list during its grand rally in May 2022 as Frontrow was a major advertiser in his previous television gameshow.

PINUNO
PINUNO first nominee Ivan Howard A. Guintu is the CEO of HG-III Construction and Development Corporation, a real estate company. The party-list is among the 53 party-list groups granted registration by the Commission on Elections (Comelec) in 2022. Senator Lito Lapid is backing the party-list, whose moniker is named after his character “Pinuno” in Ang Probinsyano.

SAGIP-PL
SAGIP, formerly represented by Rodante Marcoleta from 2016 to 2022, was endorsed by Iglesia ni Cristo’s executive minister Eduardo Manalo. Its current first nominee in the 2022 elections is Caroline Tanchay, the Chairman/President/CEO of Oriental Peninsula Resources and the proprietor of Dean and Deluca Philippines.

1-PACMAN
This partylist is backed by boxer and Senator Manny Pacquiao.

Similar to SAGIP, two other party-lists that would have a seat in the 19th congress are backed by religious groups.

CIBAC
This party-list is led by evangelist Eduardo Villanueva commonly known as “Bro. Eddie”. He is the president-founder of the Jesus Is Lord Church Worldwide. Villanueva is also the father of Sen. Joel Villanueva.

KALINGA
KALINGA is endorsed by the Pentecostal Missionary Church of Christ (4th Watch).

Meanwhile, progressive party-list groups have been targeted with red-tagging and disinformation prior to the elections, significantly affecting their place in the results. Kabataan, Gabriela, and ACT-Teachers party-lists have successfully garnered one seat each, but Bayan Muna and Anakpawis—which represent indigent sectors and workers—were behind the race.

With the recent results of the party-list race, powerful clans are able to clinch more seats while opportunities for genuine representation of marginalized groups have shrunk further. (JJE, RTS, RVO)

This report is a collaboration between Union of Journalists of the Philippines – UP Diliman and Bulatlat.