“There has been no let-up in the spate of human rights violations from the administration of former president Arroyo to the current government. Not one case under the Arroyo government has been rendered justice, not one perpetrator has been brought to jail.” – Karapatan

MANILA – Leaders of human rights organizations in the country went to the United Nations (UN) to expose the continuing extrajudicial killings and other human rights violations under the administration of President Benigno S. Aquino III.

Attending the 16th regular session of the United Nations Human Rights Council (UNHRC) in Geneva, Switzerland are members of the Ecumenical Voice for Peace and Human Rights Philippines (EcuVoice) led by Philippine Independent Church Bishop Felixberto Calang and Karapatan chairwoman Marie Hilao Enriquez. The UNHRC is an inter-governmental body within the UN system made up of 47 states, which are responsible for strengthening the promotion and protection of human rights around the globe.

On March 11, Cristina Palabay of Karapatan and the Asia Pacific Forum on Women, Law and Development (APWLD) told the UNHRC that that there have been 40 cases of extrajudicial killings, five cases of enforced disappearances, and 27 victims of illegal arrests and detention from July 2010 to February 2011.The APWLD has a consultative status with the Economic and Social Council of the UN.

“There has been no let-up in the spate of human rights violations from the administration of former president Arroyo to the current government. Not one case under the Arroyo government has been rendered justice, not one perpetrator has been brought to jail,” Palabay said during the general debate on the promotion and protection of all human rights, civil, political, economic, social and cultural rights, including the right to development. 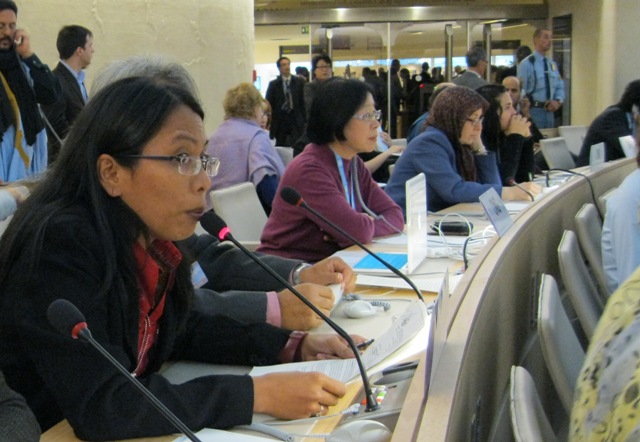 According to Karapatan, there are 206 cases of enforced disappearances and 1,206 cases of killings under former president Gloria Macapagal-Arroyo.

Palabay asserted that these cases indicate that the “vilification campaign against human rights defenders and the filing of fabricated charges against those who are being tagged as the government’s enemies in the context of implementing counter-insurgency programs such as the newly crafted Oplan Bayanihan of the Aquino government, continue.”

Palabay cited the case of Benjamin Bayles, who was shot dead on June 14, 2010 by alleged members of the military. The suspects who were apprehended by the police after the incident are members of the 61st Infantry Battalion of the Philippine Army (IBPA). A trial is going on.

Palabay also cited the cases of women human rights defenders Benjaline Hernandez and of Eden Marcellana, and peasant leader Eddie Gumanoy. Hernandez was killed by military and paramilitary forces on April 5, 2002 in Arakan Valley, North Cotabato while Marcellana and Gumany were abducted on April 21, 2003 and were found dead the next day in Bansud, Mindoro Oriental. Both cases were filed before the UN Human Rights Committee. In both cases too, the UN Human Rights Committee held the Philippine government responsible for the murders.

Up to now, however, the Philippine government has yet to enforce the UN Human Rights Committee’s rulings on the cases, including the prosecution of perpetrators.

Palabay also said that attacks against human rights defenders continue, citing a raid by the military and police of their provincial office in Daet, Camarines Norte.

Meanwhile, Geneva-based Franciscans International, in a joint statement, also expressed concern on the killings of human rights defenders in the Philippines. The international organization said: “Enforced or involuntary disappearances were practices that often went hand in hand with extrajudicial killings and torture, the main targets were political and community activists who had criticized government policies.”

Other members of the EcuVoice delegation are Dr. Merry Mia Clamor, one of the Morong 43; Ephraim Cortez, lawyer and member of the National Union of Peoples’ Lawyers (NUPL), Girlie Padilla of the Ecumenical Movement for Justice and Peace, and Rhonda Ramiro of the San Francisco Committee on Human Rights in the Philippines. Clamor, Cortez and Padilla are set to deliver their oral statements on March 14.

The delegation also met with foreign missions, international organizations and United Nations Special Rapporteur on Human Rights Defenders Margaret Sekkagya on the worsening human rights situation in the country under Aquino. Padilla and Cortez also spoke in the delegation’s side event co-sponsored with the International Movement Against Discrimination and Racism (IMADR) where they highlighted the cases of enforced disappearances under Aquino.