You Are Here: Home → 2012 → April → 27 → Reforms on automated polls seen as doomed with IT commissioner non-reappointment

The Aquino government appears bent to push back to zero election watchdog’s efforts at enhancing the poll body’s IT capabilities.

MANILA – When Augusto “Gus” Lagman was not reappointed as IT Commissioner in the Commission on Elections (Comelec), an election watchdog responded by saying it is the final act that would bury efforts to search for an accurate, secure and credible automated election system before the 2013 polls.

According to the Automated Election System Watch (AES Watch), a broad multi-sector citizens’ election watchdog, “With Lagman’s non-reappointment, the message is very clear – those who question the internal deficiencies and systems that were found in the 2010 poll automation have no place inside Comelec or they should just be dismissed.”

Reports said the president’s move was meant to save Lagman from a grueling session with the Commission on Appointments (CA) resulting in his non-confirmation. Senate President Juan Ponce Enrile, who heads the CA, had been very vocal against confirming the sole IT commissioner.

Bobby Tuazon, policy study director of the Center for People Empowerment in Governance (CenPEG) – a convener group of AES Watch, said there were efforts by the country’s leading IT groups, academics, and citizens’ election watchdogs to bring about an automated election system that complies with the election law (RA 9369). 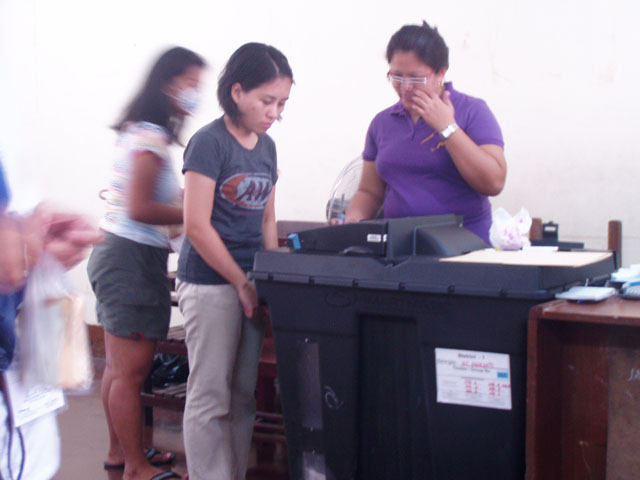 Among the efforts Tuazon mentioned were the holding of the first Filipino IT for Election (FIT4E) national conference in June 2011 where the search for an election technology was also launched. The search criteria included compliance with the minimum system capabilities such as a source code review, digital signature, voter’s verification feature, and auditability. IT practitioners along with other conference participants pledged to work for the participation of Filipino IT in the search for election technology in line with the constitutional principle on promoting indigenous science and technology.

Updating Comelec’s IT capability more a result of peoples’ initiative
Dialogues and consultations sought by AES Watch and its member-organizations with the Comelec have resulted in an in-house development of a back-end consolidation and canvassing system (CCS). The low-cost CCS development was reportedly spearheaded by Lagman who, in his short stint as a commissioner, had also led in upgrading the poll body’s IT capability.

“The Comelec Advisory Council’s (CAC) recommendations for the choice of election technology beginning with an open and public bidding were also based on proposals of AES Watch and its member-groups to make the system compliant with the law. The CAC recommended for the Comelec not to exercise its Option to Purchase the PCOs machines of SMARTMATIC and to open for public bidding the search for election technology for the 2013 synchronized polls,” Tuazon said.

In the past months, Tuazon explained, AES Watch members and other groups had also pushed for legislative measures seeking to enhance the election law (RA 9369) and help enlighten Congress on its mandate to assess the election system performance in 2010 and recommend an appropriate technology for the coming elections. CenPEG, for one, had submitted to the 15th Congress a whole matrix of proposals for legislative action to help enhance and improve poll automation in the country.

Unfortunately, “These efforts suffered a big blow with the apparent fixation of Comelec to harness the election technology that was used in May 2010 despite the poll body’s own admission about its deficiencies. The Comelec last March 30 forged a new deal with the same foreign company to purchase its controversial voting machines. Lagman, together with Commissioner Christian Robert Lim, argued against the deal,” he said.

“It was precisely the appointment of an IT commissioner that was to help restore trust in the Comelec particularly in the management of an automated election system. Lagman’s removal was the final act that pushed back to zero the efforts at enhancing the poll body’s IT capabilities.”

CenPEG Senior Fellow, Dr. Pablo Manalastas, said Lagman was able to do in his short stint what the Comelec has not since the start of the poll body’s computerization program in 2007 – developing a CCS that works and at a cheaper cost. “Why kill the goose that will save you billions in golden eggs?” he asked. Manalastas, the country’s known computer programming guru who teaches at the Ateneo and UP, also said that by ignoring the Filipino IT community’s efforts to improve poll automation, the Comelec is actually tying the hands of the government to the most expensive automation project ever in the country.

The petitioners made a legal move of nullifying the new deal signed by Comelec and Smartmatic as Filipino citizens, voters and taxpayers and in pursuit of public interest. They cited a recent SC ruling saying that such act can be resorted to when the public interest so requires. They said that AES filed the motion after it was dared by Comelec Chairman Sixto Brillantes, Jr. on March 19 to sue the poll body over its purchase option.

On April 25, the SC issued a restraining order on the Comelec’s P 1.8 billion contract for the purchase of computers to be used for next year’s elections.

Court administrator Midas Marquez said the tribunal consolidated the three separate petitions challenging the deal between the collegial body and the Smartmatic-Total Information Management (TIM) to buy 80,000 precinct count optical scan (PCOS) machines. He said that SC will hear the cases in oral argument in a special en banc session to be held on May 2.

Felix D. Carao, Jr., lead volunteer lawyer of CenPEG and AES Watch, said “We took this challenge in order to once and for all settle the legal questions in court.”

Carao, Jr. cited grave abuse of discretion and violation of RA 9184 or the procurement law as two grounds for filing the petition. Comelec, Carao, Jr. said, committed grave abuse of discretion in totally disregarding the recommendation of Comelec Advisory Council (CAC) against exercising the option to purchase as provided for in the terminated July 2009 contract between the poll body and the Dutch-Venezuelan company. The CAC issued the recommendation twice – in June 2010 and in another resolution on Feb. 8 this year.

The option to purchase had already expired and, hence, the new Deed of Sale signed last March 30 is null and void, the petition states. Comelec furthermore committed grave abuse by entering into the contract despite incontrovertible findings of glitches, malfunctions, bugs, and defects of the Smartmatic PCOS machines and related paraphernalia.