Mining in Region 1: An Overview

In 2006, the then director of the Mines and Geosciences Bureau (MGB) Region 1 Samuel Paragas declared that the mining of black sand in the shores of Ilocos will amount to a $71 billion income for the government.

Also during that year, in the Ilocos Norte Investment Summit, Prof. Stan Padojinog explained that the “exploration of mineral reserves in Ilocos Norte has barely scratched the surface”.

Padojinog then said that the 15,800 metric tons of the iron ore extracted in 2006 is less than 1.7 percent of the identified iron ore reserves in the region.

During that year, the only company with an Exploration Permit for magnetite sand, titanium and other placer minerals is Colossal Mining Corp. covering five individual exploration and mining permits covering 80 percent of Northwestern Luzon including Lingayen Gulf, La Union, Ilocos Norte, Ilocos Sur and the province of Cagayan.

From 2006 onwards a total of 29 applications for an Explorarion Permit (EP) for magnetite mining has been filed at the MGB, six of which were endorsed to the MGB Central Office and two applications are under final evaluation.

An EP is a type of mining tenement that will last for two years and is renewable for eight years. An EP grants exclusive rights to the company to explore and eventually enter into other mining agreements.

The six EP applications from Altamina Exploration Resources Inc. has been converted to a Financial and Technical Assistance Agreement (FTAA) covering more than 9,794 hectares from the provinces of Pangasinan, Ilocos Sur and Ilocos Norte which was signed by the former President Gloria Macapagal-Arroyo. 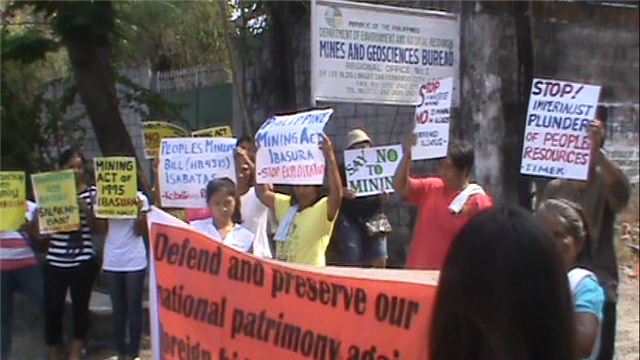 An FTAA covers 25 years and the mining company is given assurances by the government that their capital will be recovered in five years. Within this five years, the said company is not required to pay any taxes. Only the President of the Philippines is allowed to grant an application for FTAA.

According to Donna Rabang Peta of Defend Ilocos Against Mining Plunder (Defend Ilocos), the increase in the applications for magnetite mining can be directly traced to the MGB’s declaration of the potential for black sand mining in the region.

“This is despite the fact that most of the provinces in Region 1 are highly susceptible to natural disasters and that magnetite mining in the 1960’s to 70’s have resulted to irreparable damage to the coastal areas,” Peta added.

From 1964-1976 the company FILMAG conducted magnetite mining in the coastal areas of La Union and Ilocos Sur and was able to extract a total of two million metric tons of magnetite.

Anabel Narvasa, spokesperson of Defend Ilocos, explains that in Agoo, La Union, the distance from the communities to the shore used to be more than one kilometer wide. Since the entry of FILMAG, floods would reach their homes and even the farmlands.

“FILMAG even built waiting sheds and roads but these were not finished as the flood waters destroyed it too”, Narvasa said.

In the late 1980’s, Angglo Mining Corp. also extracted magnetite in the shores of Bauang to Agoo, La Union.

In Brgy. Pilar, Bauang, La Union, the continued erosion of the land caused the decline in their population from 812 in 2005 to only more than 400 in 2007. Families are either forced to evacuate or live with their neighbors due to the destruction of their houses caused by floods.

Only recently, the coastal erosion in Santa Catalina, Ilocos Sur was recorded by Defend Ilocos. In their ocular visit to the area, residents related that between the months of January to February, a tidal surge created a 100 meter horizontal erosion and 40-60 meter shoreline retreat mostly in Brgy. Paratong. 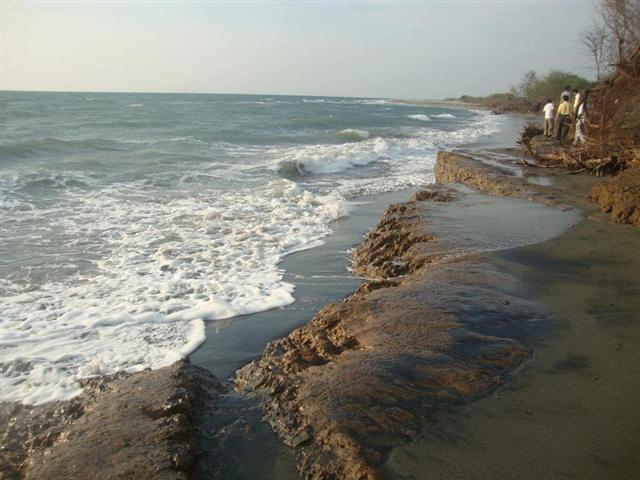 Meanwhile, in Sitio Namnama, there is a reported shoreline retreat of approximately 150 meters from 2011 to 2012.

Residents attribute the erosion to the black sand mining that occurred in their town from 2008 to 2010. They also said that there is black sand extraction in the adjacent town of San Vicente.

In Brgy. Rancho, Santa, Ilocos Sur, residents claim that the ship docked in their waters for almost one month is a mining vessel.

According to a resident, they have seen the hose that is supposed to gather magnetite sand and that before the ship arrived, they noticed a Taiwanese-looking man getting samples of the water in the nearby river.

Even though there is no approved mining exploration in their town, the effects of the ship’s activities are already felt by the mostly fisher folk community.

The sand, as the residents said, are already uneven and the water level is already unpredictable. Their fish catch also lessened and its sizes decreased. Several fisher folk also said the taste of the fish is tainted with oil, probably coming from the vessel.

Residents, both from Sta. Catalina and Santa have openly expressed their opposition to the magnetite mining in their shores.

As early as 2008, the local government of Sta. Catalina passed a resolution banning magnetite mining in their town. The municipalities of Santa, San Esteban, Caoayan and Tagudin as well as the City of Vigan have also passed resolutions declaring their opposition against black sand mining.

In La Union, the provincial government through the Provincial Council passed a resolution against all mining, especially magnetite mining in their jurisdiction.

Last February, a rally of more than 1500 students and anti-mining advocates was held at Laoag City, Ilocos Norte to protest the entry of mining companies in the province. The activity was spearheaded by the Peoples Solidarity Against Large Scale and Destructive Mining in Ilocos Norte (PSALM-IN).

The creation of Defend Ilocos, according to Narvasa, is in itself proof of the widespread opposition of the people against black sand mining in the region.

Defend Ilocos was created as a network of individuals, organizations, civil society groups, church groups and local government units that aim to unite all those opposed to mining in Region I during the Ilocos Peoples Mining Summit held last November 2011 at the St. Paul College of Ilocos Sur.

Narvasa also shared that Defend Ilocos was able to have a dialogue with MGB Region 1 Director Carlos Tayag last May 2, 2012. In the dialogue, the opposition of the people of Ilocos against large-scale and desctructive mining was reiterated.

For their part, the MGB officials recognized that there are mining applications in towns that are highly susceptible to calamities.

“The recognition of the MGB that mining should not be approved in towns that are already highly prone to natural calamities should not stop there. They should immediately revoke mining applications in those areas and should not accept new applications. The opposition of the people and communities is not something that they can just dismiss,” Narvasa said.