After a five-month strike, PUP janitors regain their jobs

MANILA – On Sept 16, long-time contractual janitors of the Polytechnic University of the Philippines (PUP) are set to go back to work, to another day one on the job that they have already held for years.

“We are glad that we are able to uphold our job security through our strike,” said Rey Cagomoc, president of the janitors’ union, the Samahan ng mga Janitors sa PUP (Association of janitors in PUP). The union is an affiliate of the National Federation of Labor Unions-Kilusang Mayo Uno.

The experience of the PUP janitors, Cagomoc said, shows that “Workers really need to form unions and act together to defend their jobs.” Cagomoc himself started to work as janitor of PUP in 1985, at age 15.

So that long-time janitors could get their old jobs back, they launched and maintained a strike in front of the university since March. It lasted more than five months before a new agreement with the PUP administration was signed. They lifted their picket after celebrating with a mass and a program where they also thanked their supporters last week of August. 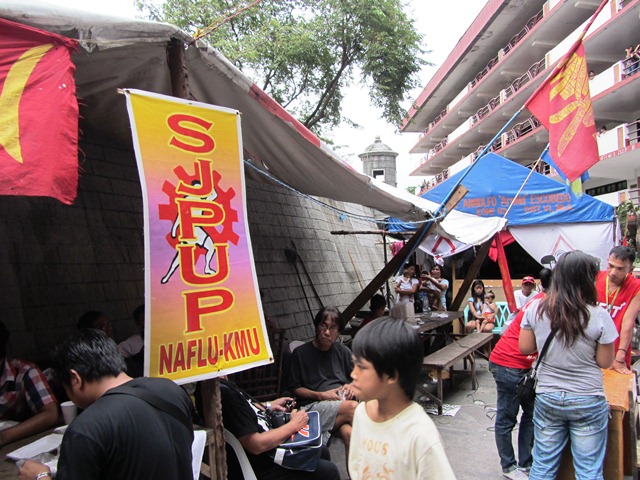 For five months PUP janitors maintained this picket to defend their old jobs, with the support of their family, other progressive unionists, iskolar ng bayan and academic employees of the university. (Photo by Marya Salamat / bulatlat.com)

Even as they celebrated their reinstatement at work, they continued to call on the government to scrap policies resulting in contractual employment.

The janitors credit their reinstatement to the workers’ unity and determined struggle. Under the blazing sun and heavy rains, they had stood firm in their picket line inside the PUP campus. “It had been very difficult, but we had to do it,” Cagomoc told Bulatlat.com. The almost seven-month period in which they were jobless and maintaining a picket had forced some of their children out of school. Some of their members were also forced out of their rented houses.

Shortly before they lifted their picket on Aug 24, Cagomoc said: “This is the last day of our strike… we endured typhoons and floods here. Losing our jobs had been like being victimized by a calamity. Some of us had had nothing to eat. We could not sleep… if not for the support of fellow workers, iskolar ng bayan (people’s scholars) and teachers of PUP.”

“We are thankful also to our families who stood by us through all these months of hunger and hardships. Not only did they encourage us to fight for our rights, they actually joined us in our picketline,” Cagomoc said.

The more than 150 janitors of PUP were summarily removed from their jobs last February. Despite years of maintaining the cleanliness of the state university, the retained janitors who number up to 152 are not directly hired regular employees of the university. Instead, they are contractual workers who formally call as employers the agency contracted by the university for maintenance services. 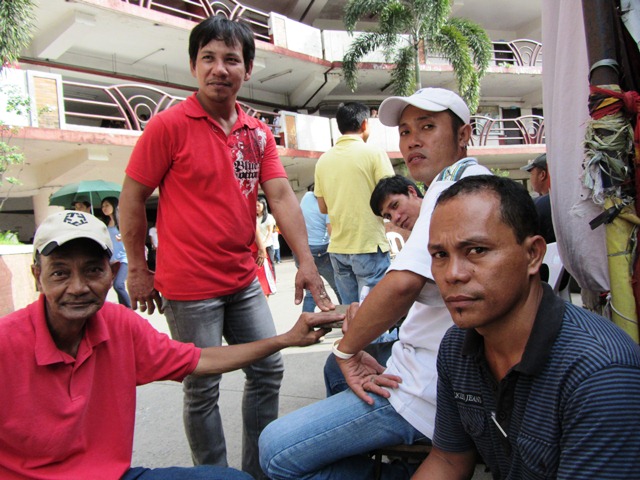 Long-time PUP janitors and unionists thanked their supporters on the last day of their picket in the campus (Photo by Marya Salamat / bulatlat.com)

Each time the university’s contract with an agency expires, and another one comes in with a better bid, the long-time janitors face the risk of losing their jobs. The incoming agency may no longer absorb them. The PUP janitors used to be direct-hired employees of the state university. They were transferred to an agency contracted by the state university since January 1986, shortly before the Marcos dictatorship was ended by the Edsa Peoples’ Power uprising.

But the long-time janitors have stood by their rights to be considered at least as regular employees, and to receive the minimum wages and other legally mandated benefits. They have formed a union. Through the years, especially each time the PUP changed agencies, they have successfully kept their jobs through campaigns and struggles. Supported by the labor center Kilusang Mayo Uno (KMU) and the various progressive organizations of teachers and students in the university, the janitors have launched campaigns to defend their jobs. Some of these campaigns led to a strike.

A PUP janitor points to a part of the campus and how, over the years and after budget cuts, the agencies contracted by the university to keep it clean employed fewer janitors to cut costs. They are paid the minimum wage, but each janitor’s assigned area to clean has widened. (Photo by Marya Salamat / bulatlat.com)

The PUP janitors’ union has now launched a total of three strikes, each taking longer than the last and concluding with the janitors getting their jobs back.

This week, even as the janitors go back to work “with their strike victorious, they must still continue to be vigilant and strong,” said Joselito Ustarez, vice-chairman on KMU. Ustarez warned that a lot could still happen from the side of the PUP administration and the new agency called Sparrow.

“The problem is not yet over,” he said, citing the continued implementation of the labor department’s order number 18-02. The KMU and other labor groups have been urging the government to stop implementing the DO 18-2, blaming this for the rise in cases of contractualization among the employed. In contractualization schemes, workers who would have been regular and long-term employees get employed instead under fixed-term contracts usually lasting less than six months. In many cases, workers get rehired via new contracts. But often, they do not become “regular” on the job, they receive lesser wages and benefits, and they have little job security. Because of their insecure status and rapid turn-over, their forming a union is also largely prevented.

As such, “the experience of the PUP janitors is instructive,” said Elmer “Bong” Labog. The said janitors are contractual workers. But they have successfully formed a union and fought for their jobs despite numerous efforts to crush and dislodge them, the long-time union members said.

Labog said the janitors’ strike has also exposed the conflicting relations of employers and employees even in a state university, and how businesses seek to squeeze profits by pressing the workers’ wages down. He urged all workers to form associations and unions. “The fight is not yet finished. More workers remain as lower paid contractual workers, and the state continues to implement policies favoring the capitalists’ efforts to enlarge their profits.”