You Are Here: Home → 2013 → February → 13 → Aquino govt engages locals in war to allow destructive mining in their ancestral domain

Opposition to the Tampakan mining project of SMI-Xstrata has claimed the lives of four people. And yet, the Aquino government continues to side with the mining giant as it attempts to override the ban issued by the local government.

MANILA – What is so good about being an “economic tiger” if it means killing off local communities who stand in the way of ‘development projects’ like large-scale open-pit mining? Can billion-dollar investments in extractive industries make up for the ethnocide and the mining operations’ disastrous consequences on the environment? Or is it even safe to ask questions like these without being tagged as a ‘terrorist’ or communist and be targeted by Aquino government’s Oplan Bayanihan?

Last week, when the so-called largest mining operation in the country suffered another setback from the determined opposition of local communities to their mining activities, the fourth member of an anti-mining tribal family was murdered in Mindanao reportedly by members of the Armed Forces of the Philippines.

The start of commercial mining operations of Xstrata-controlled Sagittarius Mines Inc. (SMI) was foiled yet again last January 21 when South Cotabato’s Sangguniang Panlungsod (SP, or Provincial Board), reiterated a previous resolution reaffirming the validity of a provision of the Provincial Environment Code that bans open pit mining in the province. SMI-Xstrata had lobbied to have the resolution reversed, so it can pursue commercial production on the rich mine site. 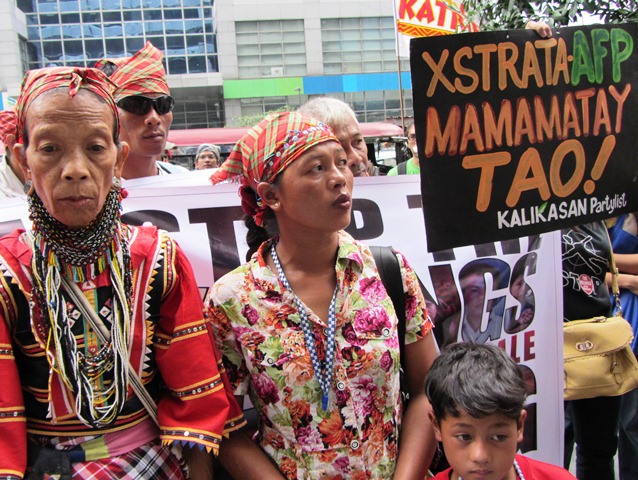 Members of SMI-Xstrata-besieged tribe bring calls against its mining operations in front of Canadian Embassy in Manila, Dec 2012 (Photo by Marya Salamat / bulatlat.com)

The Aquino government tried to save the day for mining companies. One of the critical contents of Aquino’s new mining policy issued August last year is about the assertion of the primacy of national laws over local legislation on mining. Local groups and local governments responded by challenging Aquino to reverse in court their anti-mining local ordinances.

But amid all these, the people immediately affected at the target mine site complained that they have to contend with state security forces increasingly being deployed by the Aquino government to secure the mining companies’ operations. Mining is one of the Aquino government’s identified key drivers in its economic program.

In defense of mining TNCs, Aquino govt engages in war vs tribes, locals

The Capion family of the indigenous group Blaan, who live on top of thousands of hectares of mineral-rich Tampakan Copper-Gold Project of Canadian Xstrata-Sagittarius Mining Inc. in the southern Philippine island of Mindanao, has been identified as leaders of the tribe in opposing the moves of the mining company to displace them. For that, four members of the family had been killed by the Philippine military.

Days after the South Cotabato provincial government reaffirmed its ban on open-pit mining, and thus SMI-Xstrata’s commercial operations, Kitari Capion, 24, was killed in a military operation in their community on January 29.

The pending operation of Xstrata-SMI threatens to displace 30,000 Blaans living in the Kiblawan, Tampakan, Columbio, and Malungon municipalities in the mountain ranges of Saranggani, Davao del Sur, and South Cotabato, the indigenous partylist group Katribu said.

“If developed, the Tampakan Project has the potential to make a significant contribution to the economic prosperity of the Philippines and enable a better future for the people of southern Mindanao,” reads the SMI website. SMI operates the Tampakan Project on behalf of its shareholders, Xstrata Copper, Indophil Resources NL and Tampakan Group of Companies. 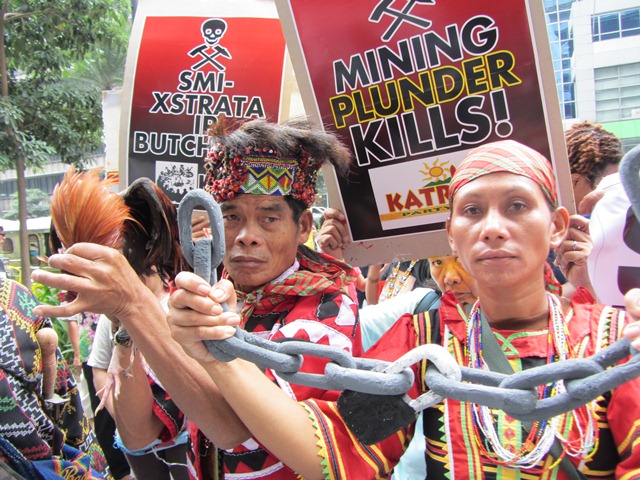 Tribe members march to HQ of SMI-Xstrata in Manila to expose the mining companies’ acts of rights violations against them, Dec 2012 (Photo by Marya Salamat / bulatlat.com)

But the locals apparently do not believe the promised economic prosperity, as it will have to come about only at the cost of their displacement from their ancestral domain. They say this domain defines their tribe and gives them their livelihood. For members of the Blaan tribe who traveled to Manila last December to bring their stories and demands, leaving their ancestral domain is tantamount to being killed.

In the mine site’s surrounding communities, the locals conducted protest actions against the disastrous repercussions of open-pit mining and mine waste dams on their environment, their safety and water sources, among others. Their actions emboldened the local government to pass an ordinance banning open-pit mining. It was this ordinance the SMI-Xstrata has been seeking to overturn by active lobbying and use of the “much-greased state forces”, even as it claims in its website that they are committed to “ethical behavior” and “to upholding and promoting the rights of local communities hosting our Tampakan Project.”

South Cotabato’s ordinance against open-pit mining has also tied the hands of the Department of Environment and Natural Resources (DENR) from giving the mining giant an Environment Compliance Certificate (ECC). But Malacañang intervened. Katribu condemned Aquino’s executive secretary Paquito Ochoa Jr, who, they said, recently ordered the DENR to grant the mining corporation an ECC, saying the mining company has fulfilled its requirements. An ECC would allow SMI-Xstrata to commence mining operations.

SMI-Xstrata is said to have already spent more than P10 billion (US$250 million) for the permit and licensing stage of their mining project. It said it will spend more than US$5.9 billion into the mine.

Its main mine site in Tampakan, South Cotabato is estimated to return 15 million tons of copper and 17.6 million ounces of gold.

Amid SMI-Xstrata’s continued efforts to mine Tampakan despite the locals’ resistance, the indigenous peoples launched a pangayaw, Katribu said.

“A pangayaw is vendetta by the Lumad for wrongs committed against the tribe. It is also a form of defense,” said Kakay Tolentino, secretary general of KATRIBU Indigenous People’s Sectoral Party.

The pangayaw is rooted since pre-colonial times when tribes are constrained to war when other tribes impinged on their territories or harmed a member of their tribe. “Nowadays, pangayaw in Mindanao is revived by modern-day threats. In this case, the Blaan are constrained to wage war by an encroaching mining TNC, defended by a well-greased AFP,” Tolentino said in a statement.

Katribu scoffed at Aquino’s carefully manufactured dovish posture, when “this government is not poised to lead this conflict to a peaceful resolution any time soon, as attested by its continued deployment of troops at the mine site.”

Instead of bringing prosperity or peace as Aquino had promised, Tolentino of Katribu said “the violations of the rules of war, forced evacuations, and the extra-judicial killings of women and children by the state forces mark the escalation of conflict between the Blaan and the state forces.”

“With the Aquino government supporting the mining giant, we could expect more brutal attacks by state security forces against the resisting community,” Tolentino warned.

Katribu explained that “the heated struggle of the IPs to defend their land became necessary amid the non-recognition of the Aquino government of the rights of indigenous peoples to their ancestral land and to self-determination, and the savage military operations to suppress and strip them of these rights.” In the end, they said, “the only viable resolution to this conflict is to genuinely recognize the rights of the Blaan people to their lands, pull-out military troops from the communities, and prohibit the entry of SMI-Xstrata in their territories.