Stand against violence against women on February 14

“It will be a huge street party and we will have lots of fun,” Monique Wilson, Philippine coordinator of the global campaign, said while pointing out that they will also have serious political demands like an end to Oplan Bayanihan and the labor export policy.

MANILA – They are ready.

Government employees, teachers, students, activists, actors and actresses and women and men from different walks of life are all set for the culmination of the One Billion Rising campaign on Feb. 14. One billion women and men from around the globe will strike, dance and rise to end all forms of violence against women and girls.

In the Philippines, One Billion Rising or OBR will be held in different provinces as women and men will dance from their respective workplaces, factories, schools, farms, the streets, in their own communities and municipalities.

In a press conference on Tuesday, Feb. 13, women from different sectors together with some of their prominent supporters expressed their support to the campaign and their participation on Feb. 14. Model and actress Angel Aquino, actress Martina Romulo and stage actor and V-men Arthur Acuna will also strike, dance and rise against violence against women. Progressive women’s group Gabriela, the Gabriela Women’s Party and the New Voice Company will lead the Philippine counterpart of OBR.

Stage actress Monique Wilson, also the Philippine coordinator of the global campaign said they prepared for the campaign for almost a year. There are now 202 countries that have joined and more than a billion have already signed the statement demanding an end to violence against women. February 14 is not all about dancing. “We will not just dance on Feb. 14, but we will also demand that the government too must take an action to stop all kinds of violence against women,” Wilson said during the press conference on Feb. 12. She said women will also stand and fight for their social and economic rights.

Different organizations will also join the OBR on the 14th bringing along with them their issues and concerns. Women and men from Migrante International, the youth sector, teachers, workers and church people will also strike, dance and rise.

Professor Judy Taguiwalo said teachers along with the employees and students will also rise and will demand to the government to heed their call on salary increase and regularization of contractual teachers.

The women with disabilities will also join the OBR on the 14th.

Acuna said violence against women have been always marginalized and the OBR campaign is very timely to put the issue forward.

Acuna is among the V-men or men who support the OBR campaign. He said that he has always been a supporter of the campaign. He said the issue of violence against women has been given little attention in a patriarchal society. “I have read news about crimes against women but why does the government pay little attention to it? Because men rule the world,” Acuna said in a short interview with Bulatlat. He added that every crime committed against women is like committing crimes against one’s mother, sister or daughter.

The Quezon City government also supports the OBR campaign as well as the Tomas Morato Business Club. Tomas Morato will be closed for the whole day activity on Feb. 14. Vice Mayor Joy Belmonte said employees of Quezon City will also strike, dance and rise to show support and stand against violations against women. 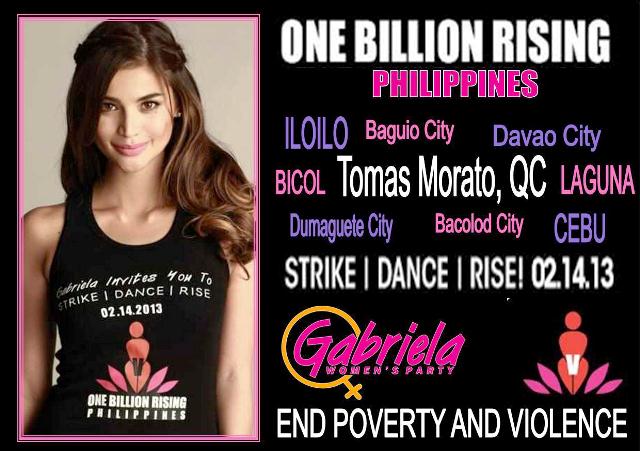 Meanwhile, the OBR on the 14th will start at 8:00 a.m. with a parade starting from Scout Castor to Tomas Morato. A bazaar will be also set up at the streets. “It will be a huge street party and we will have lots of fun,” Wilson said while pointing out that they will also have serious political demands like an end to Oplan Bayanihan and the labor export policy.