“Not only is there a dearth of jobs in the country, there is a dearth of decent jobs. More and more Filipinos are unhappy with jobs that offer meager wages and contractual status and deny workers their legitimate rights.” – Elmer Labog, KMU

MANILA – Only last February, the Philippines received praises from the World Bank for being a rising “tiger economy.” Before international bankers, President Benigno “Noynoy” Aquino III boasted of the country’s higher-than-expected GDP growth of 6.6-percent in 2012. He then described 2013 as a “critical juncture” in his administration; he said it is a time to look back at the “progress” the country has made and to strategize for further improvement.

But just a month later, whatever “progress” the country has made seems to starkly contradict the day-to-day realities in the lives of ordinary Filipinos. “No employment growth, no inclusive growth,” is how the progressive labor center Kilusang Mayo Uno (KMU) defines the situation.

The (National Statistics Office) NSO’s Labor Force Survey released a few days ago showed that, despite the government’s definition of an employed person as someone who works for just an hour in the past two weeks within their survey, the number of unemployed Filipinos still went up to 2.894 million this January from 2.892 million in the same month in 2012. 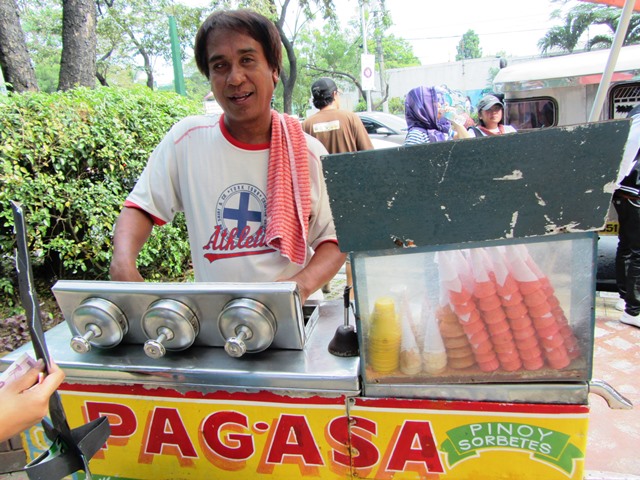 Retail selling and driving, two of the most frequently taken odd jobs by unemployed Filipinos (Photos by Marya Salamat / bulatlat.com) 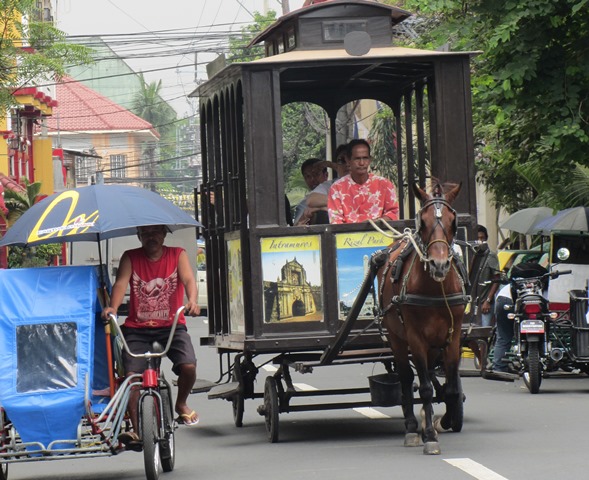 In Jan 2012, those 2.9 million unemployed Filipinos already represented the highest in Asia, suggesting that joblessness is more severe in this country. Optimistic expectations said the Philippines may recover in terms of economic growth within the year, which should translate to more jobs. But both the unemployment rate and number of unemployed remained almost the same, even after a higher-than-expected growth in 2012.

“While parents and the youth shoulder the burden of expensive education, they see no relief as joblessness only worsens,” the youth group Anakbayan said in reaction to the NSO report last March 15. The unemployment rate in the country reached 7.1 percent in January this year, higher than the 6.8 percent registered in October 2012, and only a negligible .1 reduction (from 7.2) in January of last year.

Meanwhile, the underemployed increased by nearly a million. From 18.8 per cent to 20.9 per cent of Filipino labor force, the number of Filipinos who want more jobs, and therefore more income, increased from 7.018 million last year to 7.934 million this year.

This week, the country’s public utility drivers and small operators, workers, urban poor and youth and students are set to conduct a nationwide peoples’ protest against the impact of Aquino’s economic programs; against the government’s growing budget cuts on education, health and other social services; and the increasing prices resulting from the government’s various stages of privatization and liberalization of businesses engaged in public services.

This week’s scheduled protest action is also amplified by the tragic suicide of a freshman college student of the University of the Philippines. After she was forced to file a leave for failure to pay her tuition, Kristel Tejada was reportedly so consumed with hopelessness that she ended her own life.

Various groups said her suicide underscores the fatal anti-people impact of Aquino’s crippling budget cuts on education, health care and other social services, and at the same time the failure of his cheap labor policy.

“The UP Manila freshman’s death belies the Aquino government’s claim that the economy is growing,” said Elmer “Bong” Labog, chairman of KMU, in a statement. 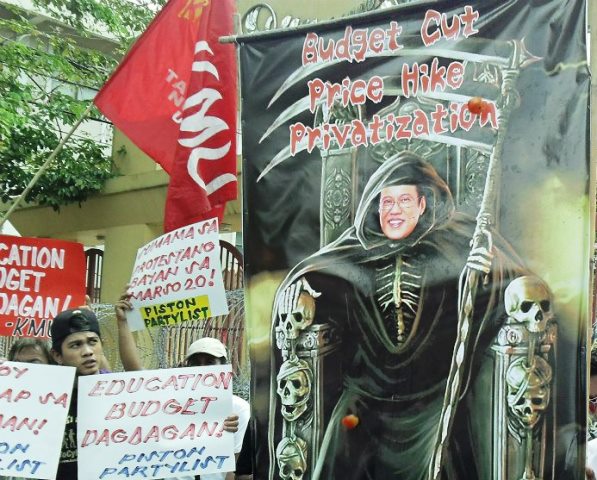 In a march-rally to Mendiola, workers depict Pres. Benigno “Noynoy” Aquino as the grim reaper. They blame his government’s budget cuts, approval of price hikes, for causing poverty and death. (Photo courtesy of KMU / bulatlat.com)

Tejada’s father had reportedly lost his regular job as warehouse coordinator when the company shut down, prompting him to work as a taxi driver with insecure income and work hours.

“Working as a taxi driver is an occupation that abounds in the country because of chronic unemployment. Her mother is a housewife, unable to earn a living to augment the meager income of her father,” Labog said.

For the country’s youth, getting a paying job is even more difficult — youth unemployment in the Philippines is often two or three times higher than the national average, based on government statistics. Cherry Orendain, regional spokesperson of Anakbayan, said the high unemployment rate and expensive education push the Filipino youth to an uncertain future.

“The recent NSO jobs data should put all doubts to rest: the growth that the Aquino government brags about is not inclusive and is a jobless one,” said Labog. “The country’s Gross Domestic Product can grow without improving the lives of ordinary Filipinos.”

The KMU noted that “the available jobs in the country are merely stopgap.” Worse, “not only is there a dearth of jobs in the country, there is a dearth of decent jobs. More and more Filipinos are unhappy with jobs that offer meager wages and contractual status and deny workers their legitimate rights,” Labog added.

“Noynoy Aquino’s boasted economic growth has become a cruel irony,” Cherry Orendain of Anakbayan in Mindanao said. She reiterated “the people’s demand for concrete solutions such as national industrialization to boost local employment and more budget for social services, especially on education.”

But the Aquino administration responded instead with non-solutions, Orendain said. These non-solutions, she said, include the likes of CCT (conditional cash transfer), which, critics said, are dole outs and geared also to fight insurgency, privatization of social services with Public-Private Partnerships (PPP), and incessant budget cuts to education and other basic social services.

The Aquino government’s main approach to generating jobs, largely “through attracting foreign investors by offering cheap and repressed labor, has again been proven a failure,” the KMU said in another statement. Calling this approach as “the Aquino government’s Cheap Labor Policy,” the KMU said it has only resulted in the deterioration of available jobs and the further impoverishment of workers and ordinary Filipinos.

Instead of pursuing this approach, the labor group called for a new employment framework. KMU said a “pro-Filipino government will not press down workers’ wages, contractualize work forces and repress workers’ rights in the hope, largely false, of generating employment.”