Workers slam docking of three US vessels in the country

MANILA — National labor center Kilusang Mayo Uno condemned today the Holy week docking of three US Navy vessels in the country for so-called “routine port calls,” saying the incident shows that the country’s Visiting Forces Agreement with the US is deeply one-sided and that it violates the country’s Constitution.

KMU warned that the docking of submarine USS Ohio in Subic, of destroyer USS Decatur in Manila, and of submarine tender USS Frank Cable in Cebu on Friday, which the US Embassy in Manila merely announced, also poses dangers to Filipinos and the country’s environment.

There may not be US bases in the country, but the purpose of the US vessels – that of routine maintenance, replenishment of supplies, rest and recreation and community assistance and outreach activities – show that the entire Philippines is one big military base for the US, the KMU said in a statement. 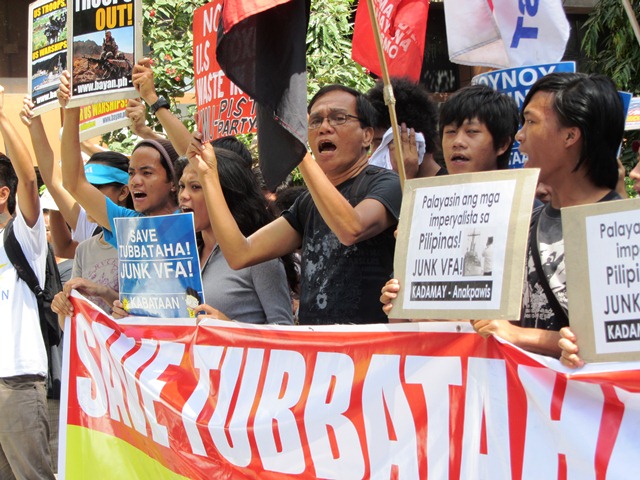 “This is deeply insulting to the country’s sovereignty. The US Embassy merely announces the entry of three US Navy vessels into the country and that’s it. This shows how one-sided the VFA is,” said Elmer “Bong” Labog, KMU chairperson.

“Pres. Aquino has clearly transformed the country into a US military base. He continues to surpass previous presidents in his puppetry to the US, to the detriment of the Filipino workers and people,” he said.

The labor center pointed to how the Filipinos were “not even apprised of the contents of these vessels.” The VFA provision that the US will neither confirm nor deny the existence of nuclear weapons in the vessels that it brings to the country violates the country’s Constitution,” he added.

The 1987 Constitution in Section 8 of Article II declares as “State Policy” that “The Philippines, consistent with the national interest, adopts and pursues a policy of freedom from nuclear weapons in its territory.”

Last September 2011, a declassified document from independent non-governmental organization National Security Archive based in the George Washington University exposed that the US government had stored nuclear weapons in the Philippines during the time of the Marcos dictatorship.

“No self-respecting government would allow a foreign country, even if it’s the most powerful country in the world, to simply announce the docking of warships in its territory,” Labog said. He concluded that “Aquino is clearly contemptuous of the country’s sovereignty.” (By M. Salamat)