During a nationally coordinated drivers’ and workers’ protest led by Piston yesterday, March 24, George San Mateo, national president of Piston, said they disagree with the fare hike plan aired by Acto, 1-Utak, Altodap and Fejodap, “because public opinion will be turned against us drivers.”

MANILA – Jeepney and public utility drivers under the Pinagkaisang Samahan ng Tsuper at Operators Nationwide (Piston) criticized the plans of other transport groups to forcibly hike fares by 50 centavos even with the disapproval of the LTFRB Board.

During a nationally coordinated drivers’ and workers’ protest led by Piston yesterday, March 24, George San Mateo, national president of Piston, said they disagree with the fare hike plan aired by Acto, 1-Utak, Altodap and Fejodap, “because public opinion will be turned against us drivers.”

Piston has historically demanded action from the government against increases in oil prices and other related expenses of public utility drivers and operators.

San Mateo said the plans of other transport groups would only create enmity between jeepney drivers and commuters who are both reeling from the consequences of high prices of oil, goods and services.

Pistons nationally coordinated protest action on March 24 was “just the start of a series of protest actions” as the drivers said they could not bear anymore their worsening impoverishment, oppression and exploitation under the four-year rule of the Aquino government.

San Mateo urged his fellow transport leaders from Acto, 1-Utak, Altodap and Fejodap and other groups not to resort to passing the burden of high oil prices to the also poor commuters and instead, to join Piston in its plans to launch bigger protest actions and strike to press the government to act on drivers’ demands.

Piston listed seven demands to Malacañang, which suggested that the country’s small transport operators and public utility drivers are being burdened not just by the oil cartel’s periodic and steady price hikes, but also by many government-approved “money-making schemes.” 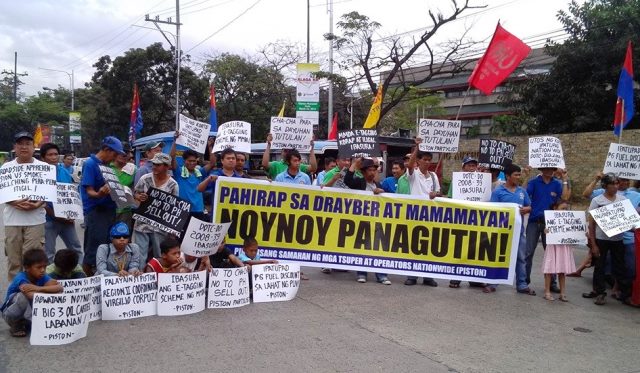 Piston’s demand letter to President Benigno ‘Noynoy’ Aquino enumerated at least seven government actions that, they said, would mitigate the deprivation and exploitation of public utility drivers. These are the following:

1. P6 ($0.13) fuel discount for diesel, gasoline and auto-LPG for all Public Utility Vehicles (PUV’s) especially the duly-franchised jeepney, multicab, AUV Express, metered taxis, metro and provincial buses. According to Piston, the oil cartel is “playing with oil prices” by jacking it up high but implementing only meager rollbacks.

Piston also reiterated its longtime demand for the scrapping of the Oil Deregulation Law, which they blame for having given the oil cartel the freedom to manipulate prices. Related to this, they urged the public to support calls to lift the 12 percent Value-Added tax imposed on petroleum products.

The progressive transport group said the fuel discount is a more sustainable, direct aid to drivers and their riders than the “corrupt, limited and corruption-prone cash disbursement under Aquino’s Pantawid-Pasada.”

2. Nationwide implementation of the court-declared illegal and unconstitutional DOTC Department Order 2008-39, which, according to Piston, the Land Transportation Office has used as basis for unfairly increasing fines and penalties on supposedly erring drivers.

3. Put a stop to the implementation of planned plate renewal (set to start this April) and the resulting requirement for drivers to pay fees under the DOTC’s Motor Vehicle Plate Standardization (MVPS) program. According to Piston, this is just one of the government’s money-making schemes as it would oblige even the vehicle owners with still good motor plates to pay for a new one.

4. Put a stop to the implementation of “illegal and corrupt Electronic-Tagging program of the MMDA (Metro Manila Development Authority).” According to Piston, the MMDA is in cahoots here with some “opportunist transport leaders and suppliers such as LightSpeed Technologies.”

Piston likened the E-tagging program to the unconstitutional Radio Frequency Identification Device (RFID) program that was stopped in 2009. It was vetted, too, by “opportunist transport leaders” and Stradcom Corporation.

The MMDA said the government will not be spending anything on the program as some transport groups would “voluntarily” pay for the equipment to be used in E-Tagging, but, according to Piston, the MMDA, 1-UTAK and Lightspeed Technologies are exacting a fee of P700 ($15.55) per E-Tag from every public vehicle owners.

5. Put a stop to the “legal and illegal scalping of drivers via random roadside apprehension by the Department of Environment and Natural Resources and local government units.” San Mateo of Piston urged the government to conduct the testing instead at the transport terminals and not on the road, where, he said, the LGUs have been abusing it to extort money from drivers, in the process inconveniencing the passengers.

6. Put a stop to moves pushing for charter change. Piston said that with the proposed amendments, as much as 100 percent of the country’s public transportation may become foreign-owned.

7. Put a stop to Oplan Bayanihan and its resulting harassment of progressive transport leaders. Piston is specifically asking the Aquino government to lift all “trumped up charges slapped on Mr. Virgilio ‘Gil’ Corpuz, Regional Coordinator of PISTON Partylist in Cagayan Valley Region. Corpuz has been in prison for more than a year now. Piston said he was “illegally arrested” on January 3 last year, under a warrant of arrest that does not name him but accused 10 members of New Peoples’ Army for an ambush on April 2012 in Tinoc, Ifugao. Ten soldiers were killed in that ambush.

San Mateo said the accusation is baseless. “Corpuz is a respected progressive transport leader who, since 2005, has served as regional coordinator for PISTON, and as member of National Council of PISTON. “Thus, it is clear that the imprisonment of Corpuz based on trumped-up charges, with a warrant that did not even name him, is harassment directed toward PISTON and the drivers’ sector.”

Piston blamed the Aquino government’s implementation of the “US-designed Oplan Bayanihan” for unleashing death squads in communities, causing enforced disappearances, illegal arrests and filing of trumped-up charges against progressive activists such as Corpuz.