MANILA — Meralco’s reasons for this month’s rate hike were reported in mainstream news yesterday, but unreported yet, based on the analysis of consumer group POWER (People Opposed to unWarranted Electricity Rates), is how these stated reasons are actually fishy and illogical.” They said the rate hike is based on questionable grounds.

The group smells market manipulation by industry players again. It is similar to the cause of last year’s historical rate hike which Meralco nearly managed to fully implement if not for the public opposition.

Acting on petitions against the hike, the Supreme Court stopped its implementation even as Meralco had already begun charging the consumers. (Note: Meralco has collected payments from more than 80 percent of customers before the SC issued a TRO. The collected amount was a least P5 billion [$111.5 million], according to Rep. Colmenares). 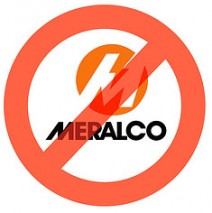 Investigations by authorities had tacitly confirmed that price manipulation had been happening. Or they recognized the irregularity that led to the rate increase.

This time around, opponents of the announced February rate hike cited examples of a similar modus operandi: Kilusang Mayo Uno pointed to the price and supply manipulation of the few big capitalists who, they said, monopolized the power sector, and the Aquino government’s “collusion” with these business groups.

Tinkering with supply to jack up prices

Teddy Casiño, spokesperson of POWER, accused the power generating companies of purposefully cutting the supply of electricity to jack up prices amid low demand from consumers. He said this practice should not be allowed since power generators are required to deliver on their committed capacities whatever the demand.

But no thanks to the monopoly control of power generation and distribution by a few and the Aquino government’s alleged collusion with these few, Casiño said, the result is this “ironic and unfair” situation where the law of supply and demand did not matter and prices increased against its logical tendency.

Instead of enjoying the benefits of low prices due to low demand and high supply, the consumers, Casiño said, will now be charged even higher rates.

The law of supply and demand dictates that prices tend to go down when demand is low.

With the monopoly behavior of power companies and their freedom to do their business as they see fit to increase their profits under the power deregulation law EPIRA, power consumers have repeatedly been made to pay increasing rate hikes due to increasing cost of generation that happened through apparently insider deals between the power distributor and generating companies.

“By maintaining the Electric Power Industry Reform Act or Epira, the Aquino government is allowing big capitalists in the power sector to boost their profits by simply increasing the burden of workers and the poor through higher power rates,” said Roger Soluta, secretary general of KMU.

Meralco’s profits, as shown by studies of independent think-tank Ibon Foundation, have increased by 56.3 per cent from 2008 to 2014. KMU described it as “disgusting” that the Philippines has some of the highest residential, commercial, and industrial power rates in all of Asia, and that even small Filipino businessmen here complain about the high power rates in the country.

Lamenting the already hard-up status of the country’s working people – they lack decently paying jobs, they are mostly in precarious, less than minimum wage-paying jobs as contractuals – the KMU also declared as unacceptable the new round of rate hikes. The labor center explained how it is evident by now “there are simply many outstanding issues in the setting of power rates in the country that remain unresolved for the Filipino workers and people to simply accept this big-time rate hike.”

Considering for example that the local power sector has not yet reflected the 60 percent drop in global oil prices, the labor group questioned the power companies’ citing oil prices as the reason for this big-time rate hike.

POWER spokesman Teddy Casiño said also in another statement that the low demand and reduced fuel costs for the last six months should have lowered the rates rather than increase it.

Aside from that, POWER raised other questions that further cast doubt on the grounds cited by Meralco for hiking rates this February.

The group questioned the basis of the National Grid Corporation of the Philippines ( NGCP) imposing additional wheeling, ancillary and systems loss charges, if the NGCP “also have a mechanism for raising rates when there is low supply and demand,” of if NGCP is passing on consumers the cost of repairing their downed transmission lines due to typhoons, when the risk for such cost is already covered by existing rates.

POWER also criticized the “much ado” devoted by Meralco to contribution to the overall power rate by the fit-all mechanism for renewable energy, when this adds only 4 centavos to the rates, an insignificant amount, said POWER, “compared to the hefty increases imposed by their allied power generators and the NGCP.”

Power demanded the exercise of full regulatory powers by the Energy Regulatory Commission (ERC) to prevent “another attempt by industry players to manipulate the market.It asked Congress to look into this matter as well as part of its oversight duties. They urge the people to protest and fight “this latest injustice.”