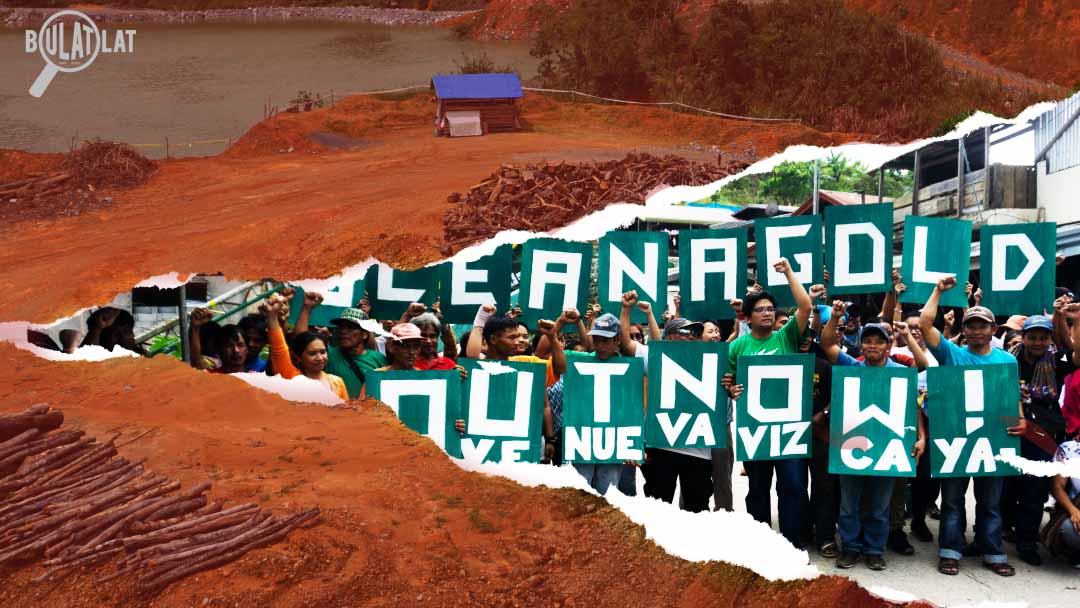 “For 25 years, Oceanagold was like a never-ending storm that has lashed at us.”

KASIBU, Nueva Vizcaya — Ronald Pumihic sat on a tent with his daughter on his lap as he watched the barangay police inspect a van entering their community. In some days, Pumihic himself would join a team manning the checkpoint. They bar the entry of supplies for Oceanagold, an Australian-Canadian gold mining company, that he, together with the rest of the community, desperately wants out.

The barricade was set up July 2, following the expiration of Oceanagold’s Financial or Technical Assistance Agreement (FTAA), a license needed for a mining company to operate, on June 20. Despite the provincial government of Nueva Ecija’s restraining order, Oceanagold has pushed through with its operations.

Pumihic’s organization, Didipio Earth Saver’s Movement Association (Desama), is one of those at the forefront of the barricade. His very household experienced the negative impacts of large-scale mining.

Before Oceanagold came in, Pumihic had enough harvest to feed his family. Since the mining giant started its operations, farms’ productivity has lowered to only 25 percent of their usual produce of palay. These days, Pumihic has to travel to Quirino or Isabela to buy food. It takes him at least a couple of hours to commute from Didipio to the next province.

Long before mining companies entered Kasibu, Nueva Vizcaya has been known for its rich agricultural lands. But now, the rice fields of farmers have dried up because of the lack of water in their irrigation.

According to the locals, the water depletion may have been due to the underground activities of Oceanagold causing ten wells, two creeks, and a spring to dry.

As early as 2014, an environmental investigation mission in Didipio found damages to forests, air pollution from dusty roads and stockpiles, and massive water pollution, all affecting the health and livelihood of affected residents.

The mission also found out that copper concentrations in the water and sediments in the affected areas greatly exceeded the metal’s safe levels, which could result in the death of aquatic organisms, and stunt the growth and productivity of agricultural lands that get irrigated or flooded by the affected rivers’ waters.

Pumihic said he always misses the old days. The once peaceful community blessed with rich soil and good neigborhood is now badly damaged and divided by a foreign company.

He has nephews working for Oceanagold. “I am really baffled why they are angry at me because I am not fighting them; what I’m fighting is the mining company,” Pumihic said. “Low wage, irresponsible mining, and being destructive to the community’s natural resources, that’s what we’re opposing here and not the employees of Oceanagold.”

Like Pumihic, Minda Dumang, 45 years old, wants Oceanagold out of their community. “For 25 years, Oceanagold was like a never-ending storm that has lashed at us,” Dumang said.

Cracks could be seen all over her house, caused by Oceanagold’s blasting operation.

“We couldn’t do anything because when we reported it, they just said that it was because our house was too old. We’re certain it was caused by them [Oceanagold],” said Dumang.

Pumihic and Dumang welcomed the recently-concluded solidarity mission organized by Kalikasan People’s Network for the Environment (Kalikasan PNE) and Alyansa ng Novo Vizcayano para sa Kalikasan (ANVIK) and supported by the provincial government of Nueva Vizcaya. It was also a preparation for an environmental investigation mission (EIM) to be launched by CEC and Agham-Advocates of Science and Technology for the People at the end of the month.

Beside the impacts on the environment and to the residents’ livelihood, the People’s Coalition on Food Sovereignty (PCFS) documented cases human rights abuses.

“We have heard accounts of intensified surveillance and harrassment against locals, aiming to discourage them in setting up the people’s barricade,” said Gail Orduña of PCFS.

Julie Simongo, a leader of Samahang PangKarapatan ng Katutubong Magsasaka at Manggagawa Inc. (Sapakkmmi), recalled an incident when unknown men forcibly entered their house while they were away. Simongo said they found their home with the door still locked, shoe prints of mud were all over the floor and their cabinets and drawers still open. Simongo, suspected that the trespasser/s entered through the ceiling.

“It is very suspicious that the money we saved was still there and nothing was gone,” Simongo said. “We suspect that the trespasser is looking for a document relevant to the people’s movement here in Didipio.”

Didipio residents have been crying foul over the rights abuses committed by the company. In January 2011, the Commission on Human Rights (CHR) declared that OceanaGold had violated the rights of Dipidio residents, including their Right to Residence, Right to Adequate Housing and Property Rights, Right to Security of Person, Right to Freedom and Movement and the Right not to be subjected to arbitrary interference. The CHR said that the company also violated the residents’ right as members of an indigenous group to manifest their culture and identity.

Nueva Vizcaya Governor Carlos Padilla expressed his support to the residents of Didipio, saying that the Oceanagold operation has been considered illegal.

The fight, Padilla, said, is not yet over as the mining company pushes for the renewal of its FTAA.

Padilla and the solidarity mission condemned the Mines and Geosciences Bureau, Department of Environment aand Natural Resources and National Commission for Indigenous People for “bowing down to the whims and caprices of foreign corporations like Oceanagold.” The company’s application for FTAA renewal has been swiftly endorsed to the Office of President Rodrigo Duterte without proper consultation with the provincial and local LGU and indigenous people of Kasibu.

Meanwhile, the community is determined to drive Oceanagold away. Their struggle would not only dictate the future of their province, but would also show if the Philippine government would continue to side with the multinational company at the expense of its people and the environment.