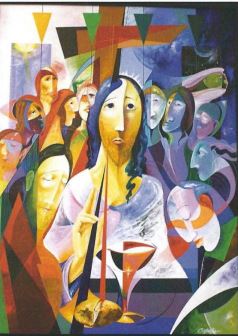 The readings today call us to discipleship, which as shown is not easy, but we are also called to trust in the faithful love of God. The first reading from Isaiah 66:10 – 14c, is in the context of Israel, a mother who, while she gave birth in pain, now suckles her child, nurturing and comforting it. Written when the people had returned to Jerusalem after exile in Babylon, this mother/comforter becomes God her/himself (v12). God promises to all those who remain faithful that through her/his divine power, they will find comfort, their hearts rejoicing (v14c). In this way they will become the light to the nations with God’s blessing extending to other than Israel. Full of hope, Isaiah prophesies that “the Lord’s power will be known to his servants” (v12, 14c).

Psalm 66, follows on from this theme. All of creation is called to praise God’s name; to see the wondrous works of God and the way he has liberated the People. It recalls the exodus from Egypt and the crossing of the Red Sea, as well as the crossing over the Jordan into the promised land (v6). Full of trust and hope in the God of history, the Psalmist again calls those who are faithful to God to rejoice in God’s might (v7) blessing God for God’s kindness and faithfulness (v16,20).

The Gospel of Luke 10, picks up the theme of talmidim or disciples. In Jewish tradition these talmidim would ask to “sit at the feet” of the rabbi to learn from that teacher. While usually these came from the educated classes. Jesus on the other hand chose his talmidim, and not they choosing him, more concerned for their “heart” than their education. These disciples not only memorized the teachings of Jesus, but also became so close to him that they lived exactly like him, treating people like him, making the same choices as him, living boldly and fearlessly like him and therefore bearing fruit like him.

When Jesus sends out the 70, we recall Numbers 11:16 – 17 where God appoints 70 elders to help Moses “share the burden” of prophesy, with the spirit of Moses put upon them without diminishing the spirit in Moses himself. Jesus sends them out like “lambs among wolves” a reference to Ezekiel 22:23ff, which condemns the leaders for unfettered corruption and violence, referring to them as “wolves tearing the prey, shedding blood, destroying lives to get dishonest gain” (v27). This clearly reflected the society at the time of Jesus. There is an urgency about their mission, being told to take little with them and not to stop on the way” (v4).

When they arrived at a house, they were to wish the householder “peace” which is the mark of God’s reign (Is 52:7). They stayed in the one house, but their mission was to the whole town. Many clearly accepted their teachings, and signs of the kingdom being at hand became visible in the cures. On the other hand, there were towns where they were rejected. In such cases they were to leave “shaking the dust from their feet” (v11). Because the kingdom is now at hand, Jesus warns that to reject this message of peace will have worse consequences than Sodom which was destroyed because “the people were arrogant, overfed, unconcerned; they did not help the poor and needy” (Ezekiel 16:49 – 50). When the disciples come back rejoicing because they have done all what Jesus commanded, which is actually expected of talmidim, he reminds them that what they should be rejoicing in is not their deeds, but that they have been chosen by God and the spirit is upon them.

Paul in Galatians 6:14 -18 also reminds us that the true disciple is the one who does as Christ did: (it is no longer I who live but Christ who lives in me: Gal 2:20). We know, as did Paul that this is not easy, he “bearing the marks of Jesus” on his body (v16), having been jailed and in chains. But he knows that joy comes from being chosen as a disciple.

Today we also are called to draw closer to Jesus and his mission of bringing about a new reign of justice, peace and love. As disciples, we know from experience the path is not easy. Moving into a new Government, we need to heed the advice of Jesus to his talmidim to be alert, especially as we see hungry farmers still being arrested for planting food crops, false charges against progressive people and organizations continuing, ecological defenders harassed and killed and indigenous peoples displaced. Yet we know from the readings that God continues to comfort the faithful, that “the Lord’s power” is with us and that good will overcome evil. We sing praises with the psalmist for all God has done and continues to do for the faithful, and share with each other the blessing of Paul: “The grace of our Lord Jesus Christ be with your spirit”.