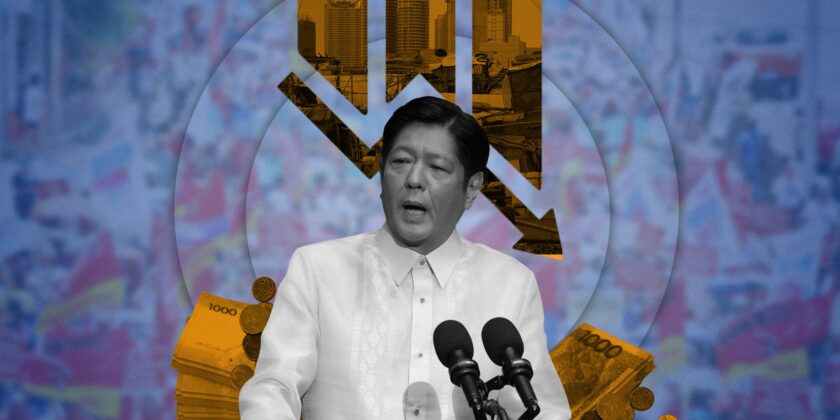 One of the legacies of the Marcos Sr. dictatorship is how it blatantly used the state and bureaucracy to plunder the economy and enrich itself and its favored elite, including foreign interests. Marcos. Jr., with his economic blueprint, is setting the stage to do the same.

The late dictator’s son, Ferdinand Marcos Jr., won the presidency on the contrived message of unity. Sustained by massive disinformation and outright lies, Marcos Jr. and his team peddled unity as a panacea to all the country’s woes. How it could address the permanent and pandemic-worsened economic crisis remained vague throughout the campaign as he actively ducked debates to enunciate his platform.

But if the first six months of his six-year term is anything to go by, unity means perpetuating the union of oligarchs and bureaucrats in plundering the economy. The highly controversial Maharlika Wealth Fund (MWF) signaled how Marcos Jr. would steer the economy. It is towards the benefit of a few favored interests, much like during his father’s dictatorial regime.

Marcos Jr., his relatives, and their gang in Congress are cooking up the MWF to amass private wealth for the rich using scant public funds while the poor desperately try to survive the red-hot inflation. Under the Marcos Jr. regime, inflation has averaged a scorching monthly rate of 7.1 percent. That’s several times faster than the pace during the pandemic years of 2020 (2.4 percent), 2021 (3.9 percent), and the first half of 2022 (4.4 percent).

Philippine inflation in the fourth quarter of the year (7.8 percent) is the worst in Southeast Asia. Government data pegged Singapore’s inflation rate during the same period at 6.7 percent; Thailand, 5.8 percent; Indonesia, 5.6 percent; and Malaysia, four percent.

Last December, the National Economic and Development Authority (NEDA) Board that Marcos Jr. chairs approved the Philippine Development Plan (PDP) 2023-2028. His chief economist claims that the overall goal of Marcos Jr.’s economic blueprint is “to reinvigorate job creation and accelerate poverty reduction by steering the economy back to its high-growth path.”

But if this is the goal for the economy, the administration is off to a bad start with deteriorating jobs and poverty. Filipinos are worse off today than before Marcos Jr. took over.

Widespread joblessness, one of the worst in the region, further magnified the impacts of high prices on most Filipinos. The latest available comparative data show that the country’s official unemployment rate of 5.2 percent in the third quarter of 2022 is higher than that of Malaysia (3.7 percent), Singapore (1.9 percent), and Thailand (1.2 percent).

High inflation and joblessness underscore the hollow growth that the economy has recorded so far under the Marcos Jr. presidency. Philippine gross domestic product (GDP) expanded by 7.6 percent in the third quarter of 2022, faster than most of its neighbors in Southeast Asia, but is not felt by the poor amid skyrocketing cost of living and job scarcity.

Marcos Jr. aims to achieve annual GDP growth of 6.5 to 7.5 percent throughout his term, as he mentioned in his first State of the Nation Address (SONA). But again, economic expansion is empty if joblessness and poverty continue to rise. Such growth is only meant for those controlling the country’s wealth and resources rather than those directly producing them.

Research group IBON Foundation estimated that the daily living wage for a family of five in the Philippines, depending on the region, varies between P830 and P1,904 as of November 2022. In contrast, the daily nominal minimum wage ranges from just P345 to P570. In Metro Manila, the living wage for a family of five has jumped by more than P800 since last year’s May elections. This increase has already wiped out the minimum wage in the capital region.

In their first survey under the Marcos Jr. regime, the Social Weather Stations (SWS) reported that 2.9 million families experienced hunger in the third quarter of 2022, about 400,000 higher than the number recorded in the same period of 2021. In addition, SWS said that the number of poor families reached 12.6 million in the third quarter of 2022, around 1.2 million more than the number posted in the same period of 2021.

These numbers are about more than just the half-year-old Marcos Jr. regime and its economic policies and programs. Unfortunately, however, the policy signals emanating from the new administration, such as the MWF and PDP, bode ill for the people and economy, long battered by multiple crises.

The PDP aims to concentrate further the country’s wealth and resources in the hands of big businesses, including foreign corporations. Under the guise of transforming production sectors to generate more quality jobs, the Marcos Jr. administration will implement more liberalization, deregulation, privatization, and denationalization of the economy.

In the agriculture, fisheries, and forestry (AFF) sector, for instance, the government plans to initiate and expand toll-based processing facilities through the build-operate-transfer (BOT) scheme. Under this program, farmers and fishers will have to shoulder user fees charged by private operators to access processing facilities instead of the government providing such services.

Another plan is to introduce the digitalization of agriculture and fisheries through big data, blockchain, and the Internet of Things. The government will also promote online and mobile platforms for marketing, payment, and product delivery.

These technologies could facilitate the systematic and massive collection of critical production data and concentrate them in the hands of private tech firms and other big business interests (e.g., agrochemical companies that want to sell more products, financial firms speculating on land, etc.). They put food producers in an even more vulnerable situation of bankruptcy and dislocation.

A major program under the PDP for the AFF sector is the improvement of regulatory systems to spur enormous private-sector investments. Under this program, the Marcos Jr. regime will facilitate the entry of foreign investments in the AFF sector and encourage partnerships between foreign and domestic investors.

For infrastructure development, the Marcos Jr. presidency looks to sustain and expand the liberalization, privatization, and commercialization of public utilities and services that his predecessors have initiated. In his SONA, he said that his administration would capitalize on the Public Service Act (PSA) that the Duterte regime passed to attract more foreign investments.

Privatization is emerging as a centerpiece program of Marcos Jr. One of his priority legislations is an omnibus law for public-private partnership (PPP) to consolidate all infrastructure undertakings between the government and the private sector.

This law will fast-track the approval and implementation of privatized infrastructure development through PPP. Complementing this is the NEDA plan to raise the threshold for projects that require the NEDA Board’s approval, which means less public evaluation and oversight for more PPP projects.

Additionally, Marcos Jr. aims to provide more protection for private firms that engage in PPP contracts. In just three months since assuming the presidency, he revised the implementing rules and regulations (IRR) of the BOT Law.

The revisions include expanding the coverage of the so-called Material Adverse Government Action (MAGA), which now comprises all government branches, not just the Executive. Under the revised IRR, court decisions unfavorable to PPP contractors can be a basis for the termination of contracts and the payment by the government to the affected private proponents.

Two prominent early targets for privatization emerged under the new regime – the EDSA Bus Carousel and the Ninoy Aquino International Airport (NAIA). In the first quarter of 2023, the Department of Transportation (DOTR) will open the bidding for the operations and maintenance of the EDSA Bus Carousel to private businesses.

From Libreng Sakay (free ride), the 320,000 to 390,000 daily commuters of the EDSA Bus Carousel will now pay for (most certainly excessive) user fees that the private operator will charge for the public transport service.

A specific goal of improving PPP rules and regulations under Marcos Jr. is to make the privatization of NAIA more profitable for private investors. Some proponents are now using the controversial power outage that recently shut down NAIA and the country’s airspace to push for the airport’s privatization.

In the pretext of modernizing the dilapidated airport, the plan will surely make the cost of air travel even more outrageous at the expense of ordinary passengers, including the thousands of overseas Filipino workers (OFWs) that use the NAIA every day. The DOTR aims to complete the NAIA privatization terms of reference (TOR) by the year’s first quarter.

Immediately after Marcos Jr. clinched the presidential elections, some of the country’s most prominent and influential tycoons boozed up with the then-presumptive president at his victory party. These are probably the same big business interests lining up for the many lucrative deals that the Marcos Jr. regime is scheming under its supposed development plan.

One of the legacies of the Marcos Sr. dictatorship is how it blatantly used the state and bureaucracy to plunder the economy and enrich itself and its favored elite, including foreign interests. Marcos. Jr., with his economic blueprint, is setting the stage to do the same. (RVO)