A second chance to live

“It would be unfair for the public, for those who helped us if we will not talk about what happened. We owe the public the truth.”

MANILA – January 12 was the third anniversary of the couple Dyan Gumanao and Armand Dayoha. Two days before that, in the broad daylight of January 10, they were forcibly taken by men at Pier 6 in Cebu City who later identified themselves as policemen.

“We have prepared for the worse,” Dyan said. They talked about the minimum and maximum of what would happen when they were held by their abductors for five days.

“The worse is that we will get killed and they will say that it’s a fake encounter,” Dyan continued.

It’s the same with Armand. “We were resolved that we were going to die.”

While they feared for their security, Dyan and Armand courageously told members of the media in a press conference last Jan. 24 the details of their captivity.

They expressed their gratitude for the overwhelming support of the public and vowed to take legal steps to hold their abductors into account.

“It would be unfair for the public, for those who helped us if we will not talk about what happened. We owe the public the truth,” Dyan said, adding that without the public clamor to surface them, they might still be missing today.

During the days of their abduction, Armand said they were blindfolded and their hands were tied.

“They did not take off our ties even when peeing. They just took it off once and whenever I had to defecate. But during those days our hands were mostly tied,” he said.

They were taken to different places. Dyan said that on the second day of their abduction, she was taken for a ride alone. This is when she thought that she would be killed.

“I was alone at that time. Even if I screamed at the top of my lungs inside the van, no one would hear me,” she said.

She also said that they were taken to Negros. “We thought that this is the place where our abductors would kill us,” she added.

Death is the only thing they could think of, she said, even when their abductors told them that they would guarantee their safety.

They saw each other again on the second day after they requested to eat the pasalubong that they brought for family and friends in Cebu.

On the days that they were together, Dyan said they were talking about possibilities or they would sing together Kath Bloom’s song, Come Here, to keep their spirits up.

“If we get out alive, we thought maybe they would file trumped-up charges against us,” Dyan said.

On January 15, they were taken to a resort in Carmen, Cebu and their abductors left them there. Dyan said that the moment she turned on her cellphone, all messages came in. They found out about the search and the overwhelming support for them. It was only then that their abduction sank in and she broke down in tears, she said.

Although the abductors had left, she said they were not able to sleep until they were rescued.
“We were thinking that they would go back and get us again,” she said.

For them, it was their second chance at life.

“The other victims were not given a chance, they are still missing. That is why we said that we need to speak up and tell our story,” Dyan added.

In its statement to the public, the Philippine National Police denied the allegations that members of the police force were involved in the abduction of Dyan and Armand. 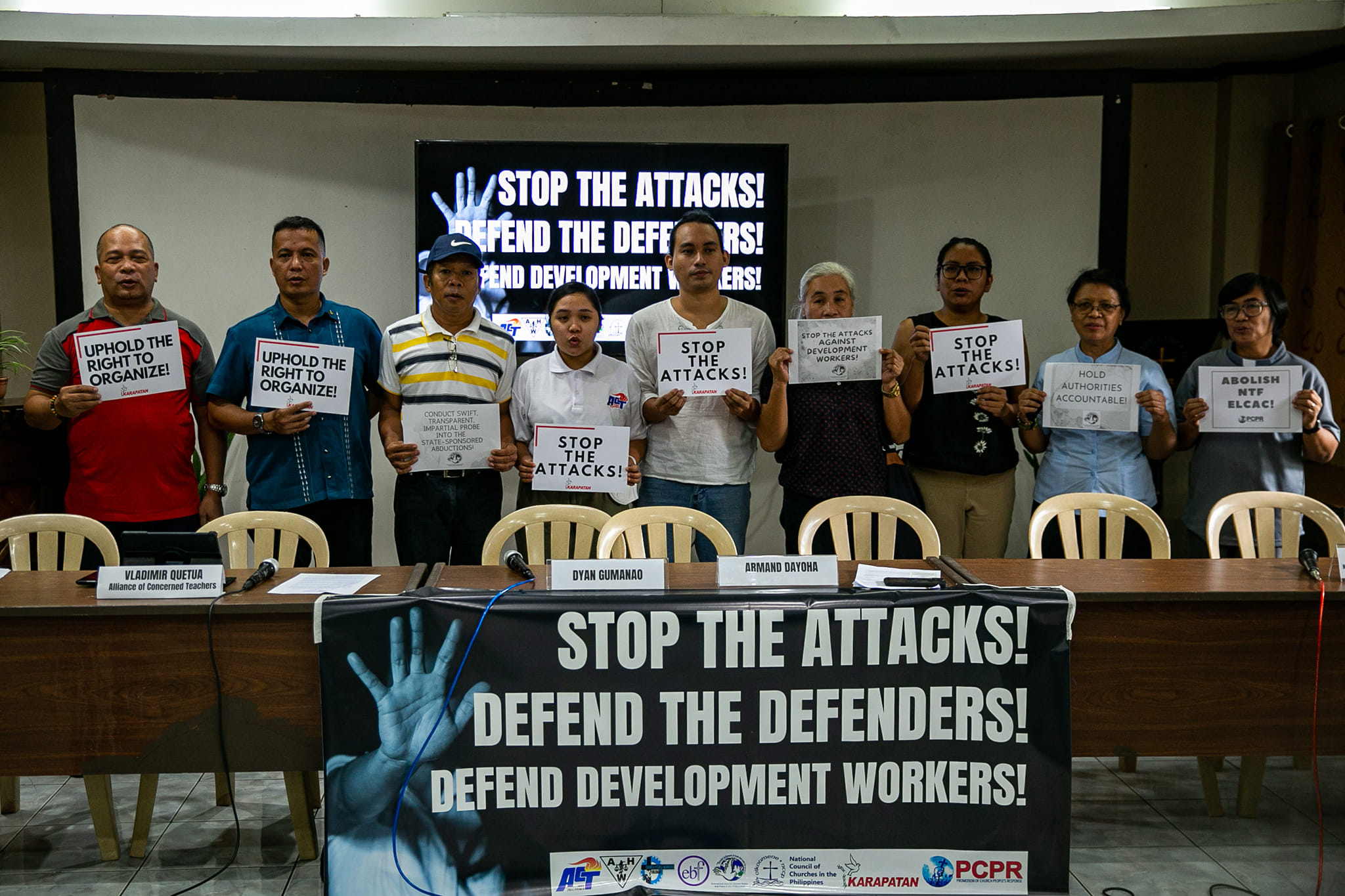 But the two are not convinced since their abductors clearly told them that they are policemen.

The two also asserted that it is only the state forces who have the capability to abduct them inside the Cebu port.

“Who would know that that is the boat that we boarded?” Armand said in Filipino.

Dyan also said that the abductors told them that they are part of a task force and that many units wanted to get them, but they “interfered.”

Armand also said that the abductors kept telling them that activism and forming a union is terrorism, a narrative which is peddled by the National Task Force to End Local Communist Armed Conflict (NTF-ELCAC).

“So does it mean that activists are really targeted? What is wrong with being an activist? The right to unionize is guaranteed by constitution,” Armand said.

Danilo Gumanao, father of Dyan, also said that during their search, that they heard that the operation was well coordinated.

“We went to all agencies, the Cebu port, the maritime police, the coast guard and the Cebu local government. We heard them saying that there is a special operation on that day.

“They knew they would get someone during the Sinulog, that is why the authorities did not do anything because they knew that it was a police operation,” Gumanao said.

He also said that the shipping company who owns the boat that Dyan and Armand boarded for Cebu also denied that a commotion took place on January 10. Later on, the company admitted that a security guard saw the commotion.

“Is that the way authorities investigate?” Dyan said.

“The video is a blessing. That is the proof that we were abducted,” she said.

A video of their abduction was posted on social media by a concerned netizen.

This is why they are hesitant to coordinate directly with the police, she said, adding that they are looking for other agencies that could help them in the investigation of their case.

Initially, the parents of Dyan and Armand filed a complaint at the Commission of Human Rights Region 7.

“We, as parents, cooperate with the police on behalf of our children. They can talk with us and stop insisting on talking to our children,” Dayoha said.

Dayoha meanwhile asked parents to support their children who are activists.

Dayoha said she is proud that Armand and Dyan are activists.

She also thanked the organizations of Armand and Dyan who helped them in their search for them.

Gumanao meanwhile said that children should not be blamed for what happened because the truth is, there is something wrong in the system.

“It is a good thing that our children are socially aware. They expose the injustices,” Gumanao said.

He also added that they know about Dyan’s work.

“We know that she is on the side of the truth and we support her principles and there is nothing wrong with that. Why do this to them?” he said.

He also called on parents to not let this happen to their children which he described as inhuman, barbaric and uncivilized.

Karapatan Secretary General Cristina Palabay meanwhile said that the abductors of Dyan and Armand should be held accountable under the Anti-Enforced Disappearance Law.

“Aside from the brazenness of the abduction, the PNP in a number of interviews denied that an incident of abduction happened at the Cebu port, and were unresponsive to the family’s pleas of assistance as soon as they went missing. This indifference and inaction should be taken into account as their case is to be investigated,” Palabay said.

Enforced disappearance is penalized under Anti-Enforced Disappearance Act or RA 1035. It underlines command responsibility in cases of abductions and enforced disappearances, stating that the immediate commanding officer of the unit concerned, Armed Forces of the Philippines or the PNP, shall be held liable as principal to the crime.

The law also states that “if commanding officers did not take preventive or coercive action either before, during or after its commission, when he or she has the authority to prevent or investigate allegations of enforced or involuntary disappearance but failed to prevent or investigate such allegations, whether deliberately or due to negligence, shall also be held liable as principal.”

Palabay said domestic mechanisms are hopeless; this is why, she said international investigation must be pushed to look into human rights abuses in the Philippines.

“We hope that the International Labor Organization will bring this recommendation to the United Nations Human Rights Committee,” Palabay added.

Dyan presented her and Armand’s testimony as survivors of abduction before the ILO-High Level Tripartite Mission here in Manila.

Dyan and Armand are development workers in Cebu City. Dyan is an organizer and coordinator of the Alliance of Concerned Teachers in Region 7. She is also working for the Community Empowerment Resource Center (CERNET), a non-profit organization in Cebu.

Prior to that, Dyan was a former vice president for Visayas of the National Union of Students of the Philippines and a correspondent of Cebu-based alternative media Aninaw Productions.

Armand on the other hand is an organizer of the Alliance of Health Workers in Region 7. He also works for a non-government organization, the Visayas Institute for Human Development Advocacy that works for the workers’ rights and welfare in the region. He is also a visual artist and was one of the 10 finalists of the Jose Joya Awards in 2019.

Prior to their abduction, Dyan also experienced harassment and surveillance.

Both are former students of the University of the Philippines Cebu where they were batch mates and where they met each other. They are also both lecturers in the university.

At present, the two are under therapy because of the trauma caused by their experience.

“I am processing things with him because he knows what to do,” Dyan said. Armand is a Psychology graduate in UP.

But amid all these, they said one thing is definite, that they remain resolute in serving the people and that their plan of getting married will happen one day. (RTS, RVO)