The eighth anniversary of the Hacienda Luisita massacre has also been declared as part of the International Day of Action against Trade Union Repression.

MANILA –Eight years have passed since the infamous Hacienda Luisita massacre, but as the members and leaders of progressive labor groups lamented, justice hasn’t been served. Worse, the problems that had led to this massacre have remained, even worsened, according to progressive labor unionists led by the Kilusang Mayo Uno. They marked the anniversary of the massacre with protests at Mendiola Bridge near Malacañang. Simultaneously in Hacienda Luisita in Tarlac, workers and farmworkers held protest actions to mark the massacre and the absence of justice until now.

According to statements of workers’ groups that joined the protests in Manila, the problems that drove the Hacienda farmworkers into launching a strike in 2004 still remain. These problems, they said, include cheap wages, landlessness and trade union repression, being perpetuated by assumption of jurisdiction (AJ) powers of the Philippine labor secretary and president. 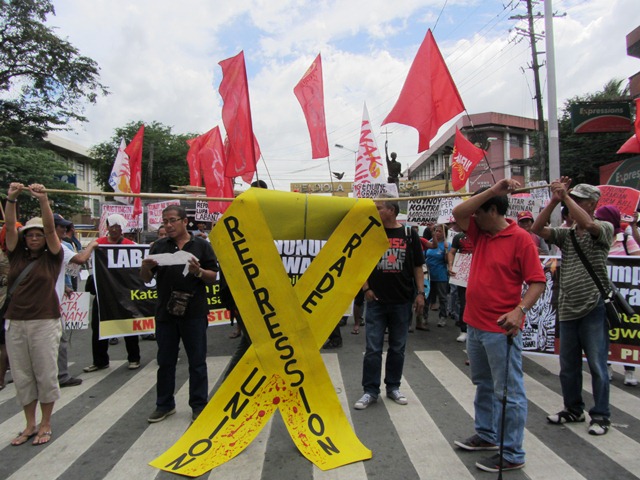 “We are revolted that after eight years, justice has not been served over this gruesome crime and that trade-union repression continues to this day,” said Elmer ‘Bong’ Labog, chairman of Kilusang Mayo Uno.

The eighth anniversary of the massacre has also been declared as part of the International Day of Action against Trade Union Repression. On this day, protesters said that in various cities across the globe, workers are also unveiling streamers and placards that say: “I condemn trade union repression.” This statement is followed by calls against specific instances of trade union repression in their countries.

In the Philippines, these calls include the condemnation of trade union repression, assumption of jurisdiction orders, contractualization, and militarization of workplaces and communities.

Labog decried the continuing enforcement of assumption of jurisdiction orders to justify violence in breaking up or scuttling strikes. He noted that it was an assumption of jurisdiction order that served as a “license to kill” by state forces that resulted in the Hacienda Luisita massacre in 2004. Today, he said, the government is “still using violence to force us to swallow low wages.”

Random interviews with unionists who joined the protest in Mendiola revealed the same fury at assumption jurisdiction (AJ) orders.

“Assumption of jurisdiction orders are like hands of steel being used to prevent workers’ attempts to launch a strike,” a worker in a flat glass company told Bulatlat.com in Filipino. “What about our rights then,” he asked. “What if we are already being abused?”

The government has created difficulties for unions that conduct a strike through assumption of jurisdiction orders that are difficult to surmount, a machine operator from an export-oriented company told Bulatlat.com. He blames it for having blunted the strike weapon.

“Our right to hold a strike loses meaning with assumption of jurisdiction orders,” he concluded.

“We must continue to work for the scrapping of the assumption of jurisdiction order,” Labog said in his speech during their program in Mendiola.

After years of implementation of labor contractualization, the assumption of jurisdiction order and violence against unions, unions, especially the progressive ones, have now been reduced significantly, as even the labor department’s annual tally of union density in the country reveals. Workers who attempt to form unions to demand for better wages and working conditions are immediately repressed and retrenched. 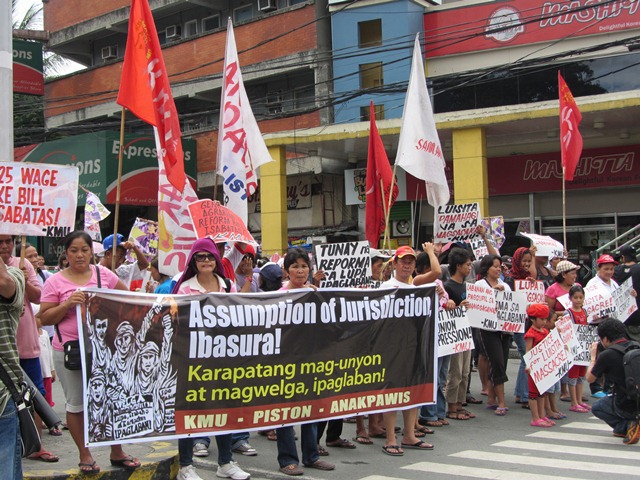 “Denial of rights to unionize and to strike result in easier imposition of lower wages” (Photo by Marya Salamat / bulatlat.com)

Labog explained that policies restricting the organization of unions are still in place today. He cited workers who, while trying to form unions and stand up for workers’ rights, were laid off, some were dismissed through the filing of trumped-up charges.

Some unionists who are not yet affiliated with the KMU joined the protests in Mendiola. They shared what are now familiar experiences of having to face trumped up cases resulting to dismissals so they can be dissuaded from forming unions.

Filipino workers had been shot and killed while demanding for humane wages, but up to now, wages are even more meager, local labor leaders said in Mendiola. KMU denounced the Aquino government for “refusing to significantly hike wages, rejecting calls for a P125 ($2.97) across-the-board daily wage hike nationwide.” The P125 wage hike demand is now more than a decade-old wage hike campaign and is still being blocked by the government. A bill proposing to enact the increase in the minimum wage has been languishing in Congress.

Worse, the implementation of Aquino’s new wage policy called Two-Tier Wage system is imposing a wage cut and wage freeze while forcing workers to work more hours, the KMU has warned. Labog said the new wage system, far from addressing the supposed “unintended consequences” of wage regionalization, will only worsen the situation of workers by “promoting contractualization and trade-union repression in order to further press down wages.” He took the government to task for implementing a cheap labor policy. This, he said, includes the K+12 program in basic education “that aims to churn out cheap labor for big capitalists.”