“Capitalists’ profits have steadily increased over the years because wages have largely been frozen and contractual employment has been assiduously promoted.” – KPMM

MANILA – How many Filipino employees today are considered as “regular” on the job, enjoying benefits like social security, vacation and sick leaves, retirement pay and an assurance that they would be given due process? According to unionists who protested in front of the labor department offices in Metro Manila and in other regions, such regular employees are increasingly becoming an endangered species. There are now only 220,000 unionized workers compared to nearly 38-million employed Filipinos.

Nearly a hundred workers from various labor organizations trooped to the main office of the labor department in Manila this week. They called on Labor Secretary Rosalinda Baldoz and President Benigno “Noynoy” Aquino III to heed the workers’ demand for a P125 across-the-board daily wage hike nationwide and for an end to contractual employment. 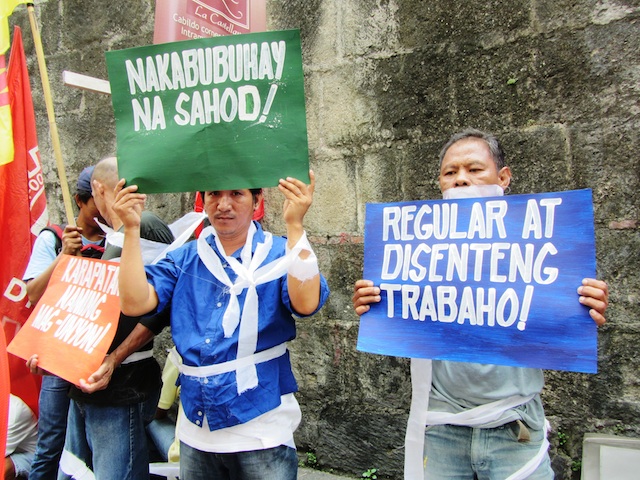 To dramatize their plight, workers in Metro Manila symbolically tied themselves to poles in front of the Labor Department’s main office, while holding placards with their demands written on it: Nakabubuhay na sahod (living wage), regular at disenteng trabaho (regular and decent jobs), karapatang mag-unyon (right to unionize).

The protest at the Labor Department’s main office in Intramuros, Manila was led by ACT2WIN! or Action against Contractualization and Towards Significant Wage Increase Now!. It is composed of labor groups Alliance of Filipino Workers, Federation of Free Workers, Kilusang Mayo Uno (KMU), National Federation of Labor, National Labor Union, Philippine Association of Free Labor Unions, as well as the Banks and Financial Unions vs. BSP Circular 268 and the Koalisyon ng mga Progresibong Manggagawa at Mamamayan.

“Workers are getting angrier as we get hungrier. We are revolted that this government has refused to significantly increase workers’ wages and prohibit the practice of contractual employment,” said Elmer “Bong” Labog, KMU chairman. 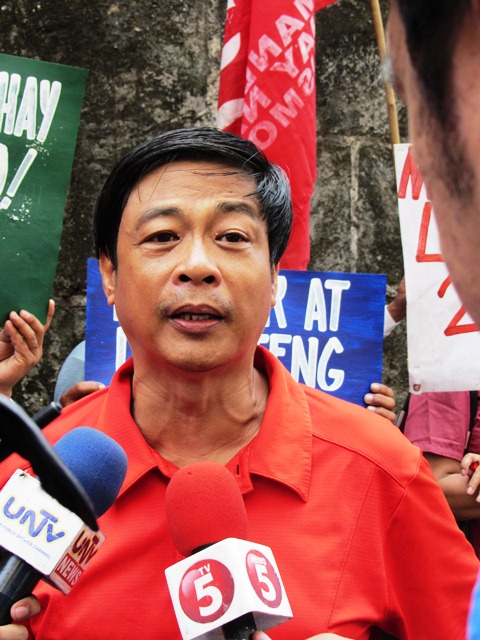 Labog denounced the Aquino government, which, he said, has rejected calls for a significant wage hike while allowing the prices of goods and services to increase. “It has the gall to allow another round of increases in the rates of basic utilities,” he said.

The Aquino government has been actively seeking to privatize more public hospitals and remaining public water facilities, moves that spook even public health workers and government employees as they warn it would result in costlier health and water services. Indeed, the earlier privatization of water, telecommunications, oil and gas and power generation and distribution, had all resulted in hundredfold increases in its prices.

On top of these increases, though, the government is increasing fees for the processing of many required official documents, as stated in President Benigno “Noynoy” Aquino III’s Administrative Oder 31. It is approving power and water rate hikes, and pushing for a fare hike in mass rail systems such as the MRT and LRT.

“This government has not only failed to provide workers some form of relief from the rising prices of basic goods and services, it is further increasing the burden on workers’ backs by hiking rates that are under its control,” Labog said.

“The minimum wages paid to our workers are grossly inadequate for them to buy food, pay the house rent, electricity and water bills. The annual wage adjustments are never enough to compensate for the rise in the cost of living,” said Dave Diwa, president of National Labor Union and members of Act2Win.

Unionists question the Aquino government’s speed of action for the few rich and powerful in the Philippines, which contrasts starkly with this government’s foot-dragging and outright opposition to measures that could benefit the workers and people. Charlie Arevalo, spokesman of Koalisyon ng Progresibong Manggagawa at Mamamayan Makati-Pasay, decried how “The 15th Congress has acted swiftly on measures that were prioritized by the Aquino government,” but has done the opposite “on measures that are priorities for the Filipino workers and people.”

Capitalists’ profits have steadily increased over the years because wages have almost been frozen and contractual employment has ardently been promoted, Arevalo said. He added that now that workers are facing worsening hunger and poverty, the substantial wage hike and the regular employment that have been denied us for so long should have been the Aquino government’s priority.

Raymund Aceña, spokesman of Banking and Financial Unios vs. BSP Circular 268, noted that an increasing number of workers are now holding strikes and other forms of protests across the country. He traced it to the “increasingly intolerable plight of Filipino workers.”

“Employers are refusing to hike wages and benefits in CBA negotiations and are laying off regular workers so they can be replaced by contractuals. Union leaders who are fighting for their members are being laid off,” Aceña said during the protest in front of the labor department. Aceña himself is an example. Union president of the employees of Hongkong-Shanghai Banking Corporation (HSBC), he was dismissed from his job early this year even if his record in the company showed that the management had praised his job performance. Aceña was dismissed shortly before their union’s collective bargaining negotiations started. 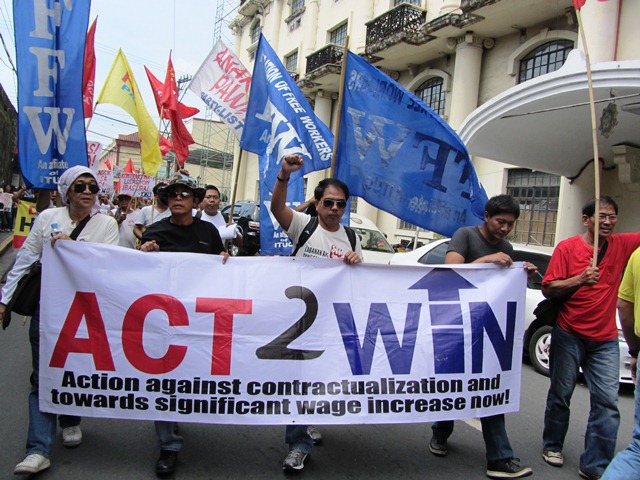 Even among bank employees who used to be regarded as well-paid, dismissals to pave the way for lower-paid contractual or casual workers have been decimating unions. This resulted in diminished workers’ clout and correspondingly diminished wages and benefits. In HSBC, for example, the union that used to count 770 members now only have 390. The reduction in union membership represents an increase in the number of outsourced jobs where the replacement employees reportedly have no overtime pay, health card, leave pay, sick leave, and retirement pay.

The employees union of Standard-Chartered Bank operating in the Philippines reportedly had 400 members last year. It is now down to just 89 members. Bank of America’s 400 unionists are now reduced to just six due to contractualization and job cuts.

Starting this year, more than 150 employees of the Bank of Philippine Islands Family Bank are affected by the bank’s outsourcing of certain jobs, according to Bonifacio Frilles, president of the bank employees’ union. 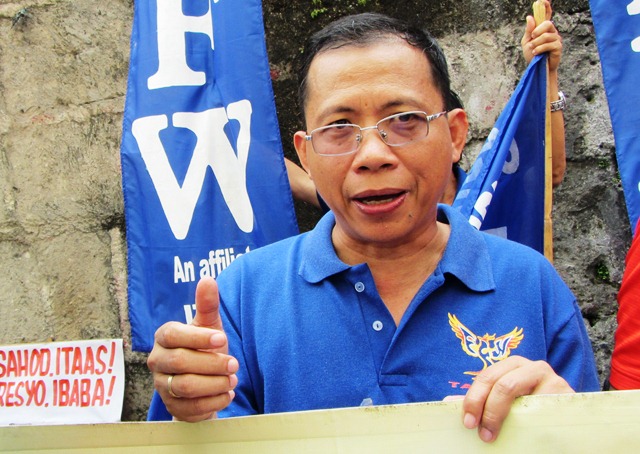 Our workers need decent work with decent pay, said Sonny Matula, a lawyer and president of Federation of Free Workers (FFW). He said during the protest in front of the labor department’s main office that “Contractual jobs for five months working in a multinational firm as a laborer under a subcontractor is not decent work but an exploitative labor scheme.”

Matula shared that members of FFW are also suffering from contractualization. He cited as example SR Metals, a mining company operating in Tubay, Agusan. Its union has little more than 100 members, while around 900 or 90-percent are contractual workers under a cooperative.

Capitalists’ profits have steadily increased over the years because wages have largely been frozen and contractual employment has been assiduously promoted, said Arevalo of KPMM. Like other labor leaders, he asked Labor Secretary Baldoz and President Aquino to mind the workers. Saying how workers now are facing worsening hunger and poverty, Arevalo reiterates the labor groups’ demand that, “we get the substantial wage hike and the regular employment that has been denied us for so long.”