Citing data from the Office of Scholarships and Student Services (OSSS), the Office of the Student Regent revealed that 5,391 students applied for student loans in UP Diliman alone. As of last semester, the OSR said, 1,218 students were not able to pay their loans before the scheduled release of grades.

MANILA – March 15, 2013, the nation was shocked when 16 year old UP student Kristel Tejada took her own life after she was forced to take a leave of absence because of unpaid tuition. This UP administration responded by fast-tracking the revision of the Socialized Tuition and Financial Assistance Program (STFAP) and amending the UP Code System. All of these were opposed by the student regent.

Under the STFAP, the tuition of students who fall under Bracket A, which is the default for most students unless they are able to show that their family’s income merits their categorization to Bracket B, is P1,500 ($33.83) per unit. For students who fall under bracket E1 and E2, the tuition is free and they are entitled to a stipend. The bracketing of students is based on their family’s income.

On Dec. 13, 2013, the UP Board of Regents approved the 2013 Socialized Tuition System (STS), which replaces the STFAP http://www.up.edu.ph/up-unveils-new-socialized-tuition-system/, amendments to the UP System Code, and an increase in Chemical Engineering laboratory fees, which will affect sophomores, seniors and graduating students for school year 2014-2015.

A press release by the Office of the Vice President of Public Affairs said the “new socialized tuition system will speed-up the processing of tuition bracket applications, adjust income brackets of student applicants, and increase the stipend of poor students.”

“The STFAP was established in 1989 as part of UP’s effort to democratize access to its academic programs while promoting fairness and social justice in the university. It was a program intended to make UP education affordable, despite tuition increases for students, particularly those from poor families,” UP President Alfredo E. Pascual also said in its press release.

But the Office of the Student Regent (OSR) said that since the STFAP was implemented in 1989, followed by periodical reforms in subsequent years, tuition rates in UP have skyrocketed: from P40 ($.90) per unit to the current default rate of $33.83 per unit. “In effect, this has led to a steady increase in the number of appeals for late payment and loan applications.”

Citing data from the Office of Scholarships and Student Services (OSSS), the OSR revealed that 5,391 students applied for student loans in UP Diliman alone. As of last semester, the OSR said, 1,218 students were not able to pay their loans before the scheduled release of grades.

“Regardless of the financial capacity of wealthy students, these numbers suggest that the STFAP and the high cost of tuition is actually harming, instead of helping, the most vulnerable sector of the student body: the financially challenged students,” the OSR position read.

The OSR added: “The supposed promotion of ‘fairness and social justice’ has led to more than half of the student population paying a tuition rate of $22.55 per unit, while a staggering 25% pay the rate of $33.83 per unit.”

UP’s default tuition rate is much higher than the average national tuition rate for higher education institutions, including private universities and colleges, which is pegged at P475.47 ($10.72) per unit (according to 2012-2013 CHED data).

“This already puts UP’s supposed public character into question ? if the tuition rate is more than what private institutions charge and beyond the price the masses could afford, can we still say that we are promoting a more accessible education that is based on social justice and fairness?”

The UP Code System, particularly articles 330, 430 and 431, were also amended. But provisions barring students, who have not paid their tuition, to attend classes unless obligations are settled still remained.

“Because of these provisions — which bar otherwise qualified students from enrolling or taking final examinations due to financial incapacity — more and more students are forced to take a Leave of Absence (LOA) due to their unpaid matriculation and/or student loans,” the OSR position paper read. 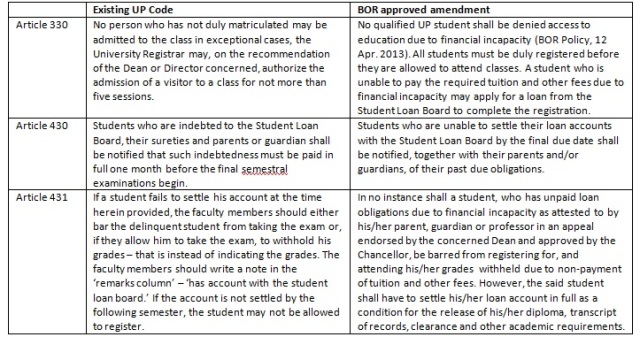 The Justice for Kristel Tejada Alliance (JFK Alliance) also drafted a counterproposal for the UP Code System. The JFK Alliance’s counterproposal for Article 430 read: “Loans provided to students for tuition purposes shall be interest free. The administrative cost of the student loan shall not be charged against the student debtors/co-debtors but against interest income earned from the tuition income. Twelve months after the loan approval date, the University shall notify concerned students and their parents/guardians regarding their financial liabilities. It shall assist them in settling their obligations through available financial assistance programs/scholarships so they can continue studying the following semester.” However, the proposal was rejected by the Board of Regents. The revised UP Code provides that at least six percent interest will be imposed for loans that would not be paid within one semester.

“Having students pay for their tuition based on their perceived capacity to pay reflects a skewed logic, subjecting UP education to the whims of market forces, and treating UP as a private enterprise rather than a public service institution,” the OSR said.

This is all in line with Roadmap to Public Higher Education Reform’s objective to rationalize utilization and maximizing resource generation by SUCs. RPHER is the Aquino administration’s blueprint for public higher education that it sets to achieve by 2016.

“Design and adoption of school fee scheme that would allow cost recovery without limiting access among the poor, guided by the principles underlying the socialized tuition fee scheme where students from financially capable families pay a larger share of the cost or tuition fee structure. This shall be supported by student financial assistance for students from low income families,” the RPHER read.

“In practice, the concept of a socialized tuition has proven to be nothing but a mask to hide and justify UP’s decision to squeeze money out of its students, instead of the government,” the OSR said. “UP has betrayed its mandate as the country’s premier tertiary state institution, and is trying to use a twisted concept of social justice to charge students for education that should be free and accessible for all, regardless of financial capacity.”