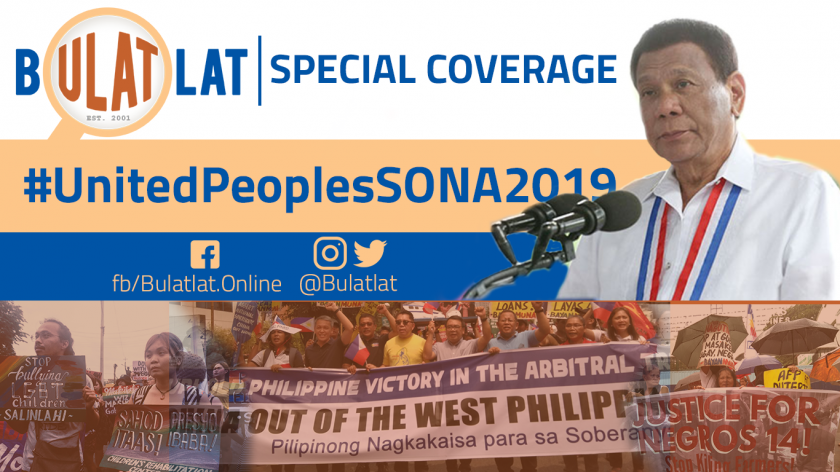 Three years into his presidency, people’s calls and aspirations for genuine change resound ever so loudly under Rodrigo Roa Duterte.

In this special page, Bulatlat is collating its reports on how the present administration has fared.

Bulatlat assessed the foreign policy of Duterte. For the past three years, the administration has become subservient both to US and China, and has allowed the two imperialist countries to undermine the nation’s sovereignty and patrimony.

Bulatlat also looked into the counterinsurgency policy of Duterte. Like the previous administrations, Duterte aims to crush the “communist insurgency” by going after what it calls as political infrastructure of the Left. Civilian communities have become targets of military operations, resulting in gross human rights violations.

READ: Kin of victims of extrajudicial killings fight for justice

The nation’s economy under Duterte has gone from bad to worse. Its tax reform package has further impoverished the poor. Its big-ticket infrastructure program Build, Build, Build is tantamount to incurring more debts and ensuring profits for the foreign and local businesses. The country’s agriculture has taken a deeper dive due to the removal of tariff on rice.

Halfway into his term, President Rodrigo Duterte’s massive infrastructure program may create “photogenic” and “tangible developments.” However, looking into the government’s own data reveals a slowing economy, a progressive think tank said.

The plight of Pepmaco workers underscores the unfulfilled promise of Duterte to end contractualization.

Behind the fragrance of laundry soaps

This line of Susan Roces in the TV ad of the laundry soap Champion appealed to most household. Its simple but straightforward message sounded like the brand was dedicated on taking care of the consumer’s clothes and hands. But it turned out, the company isn’t completely honest with the consumers.

Bulatlat’s back stories on rice tariffication have dealt on the grave impacts of the policy to the livelihood of farmers, to the country’s food security and to government employees who are set to lose their jobs.

Bulatlat is also covering the protest actions leading to SONA.

Bayan Muna rising to the challenge of looming fascist rule

Unified by their discontent with the current administration, youth groups announced they will join the United People’s SONA to counter President Rodrigo Duterte’s fourth State of the Nation Address (SONA) on July 22.

As the Philippines is set to embark on the second half of the presidency of Rodrigo Duterte, Bayan Muna Representative Carlos Zarate encouraged the public to be vigilant in safeguarding fundamental rights and upholding the country’s sovereignty and patrimony.

Church people, human rights groups, workers unions, and organizations from all political spectrum banded together to announce the launch of the United People’s SONA, the people’s counterpoint to the presidential State of the Nation Address (SONA) happening this June 22.