Painting the presence of freedom

“Every painted image of something is also about the absence of the real thing. All painting is about the presence of absence.”

The absence of basic rights and freedoms. The void left by a person killed or unjustly imprisoned for their beliefs. Land that is taken away, intrepid voices that are stifled, entire cultures that are destroyed.

Such were the absences that several freshly painted murals along the University of the Philippines-Diliman’s Freedom Wall along Katipunan Avenue attempt to make present. They are the products of a live mural painting session organized by the Concerned Artists of the Philippines (CAP), SINAGBAYAN (Sining na Naglilingkod sa Bayan), and Sama-Samang Artista Para sa Kilusang Agraryo (SAKA) last February 14, in celebration of National Arts Month.

The Free The Artists murals pay homage to, and call for the release of, artists who are political prisoners under the Duterte administration. These artists are not known for individual status or influence conferred upon by elite art establishments, but rather, for their collective life and work as social activists. They are cognized not by art patrons, but by farmers and other poor and marginalized communities into which they brought the joys and liberative potential not just of their art, but of their actual presence in their struggles.

For these artists, art is a participatory endeavour. Indeed, such was the spirit of the mural painting in their honor—participated in by dozens, and welcome to even those who have never wielded a paintbrush in their lives. “We designed our mural to be hands-on, so we used a design that was easy to trace on the wall, with solid colors on which thick brushstrokes can be used,” said Angelo V. Suarez, a poet and SAKA spokesperson. Except for the artist who designed the work, there were “no special skills involved” in the act of painting, he said.

SAKA’s mural featured portraits of Amanda Echanis (a peasant organizer and playwright arrested in Cagayan Valley while nursing her month-old baby), Alvin Fortaliza (creative director of community theater group Bansiwag Bohol arrested while distributing pamphlets), and Sheryl Catalogo (arrested in an office raid in Bacolod City while in the middle of rehearsals for a theatre production). In an additionally tragic turn of events, Sheryl’s father, Jose Catalogo—a sugarcane worker leader—was assassinated while she was in detention.

Meanwhile, at the centerpiece of CAP’s mural is the black outline of the faces of the couple JP (visual artist) and Grace Versoza (poet). A graduate of the UP College of Fine Arts and arrested in 2013, JP continues to paint while imprisoned at the Samar provincial jail. Their faces are superimposed on a stencil background of “Oust Duterte” in varying colors of neon. 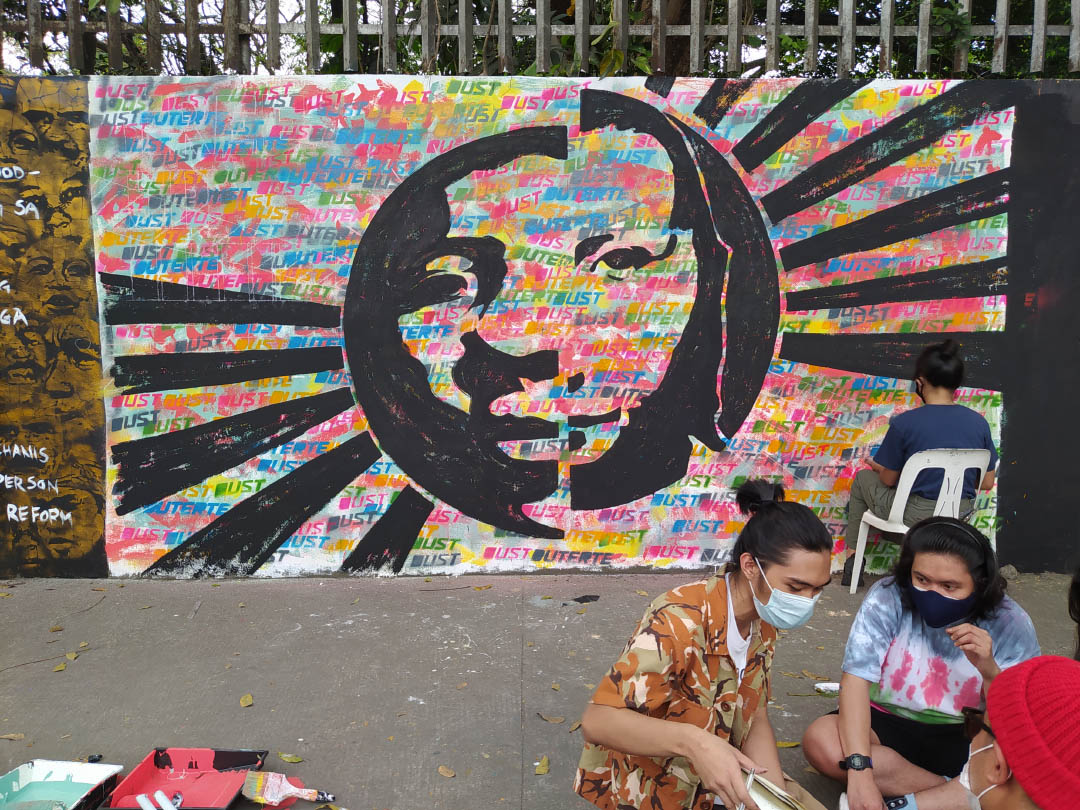 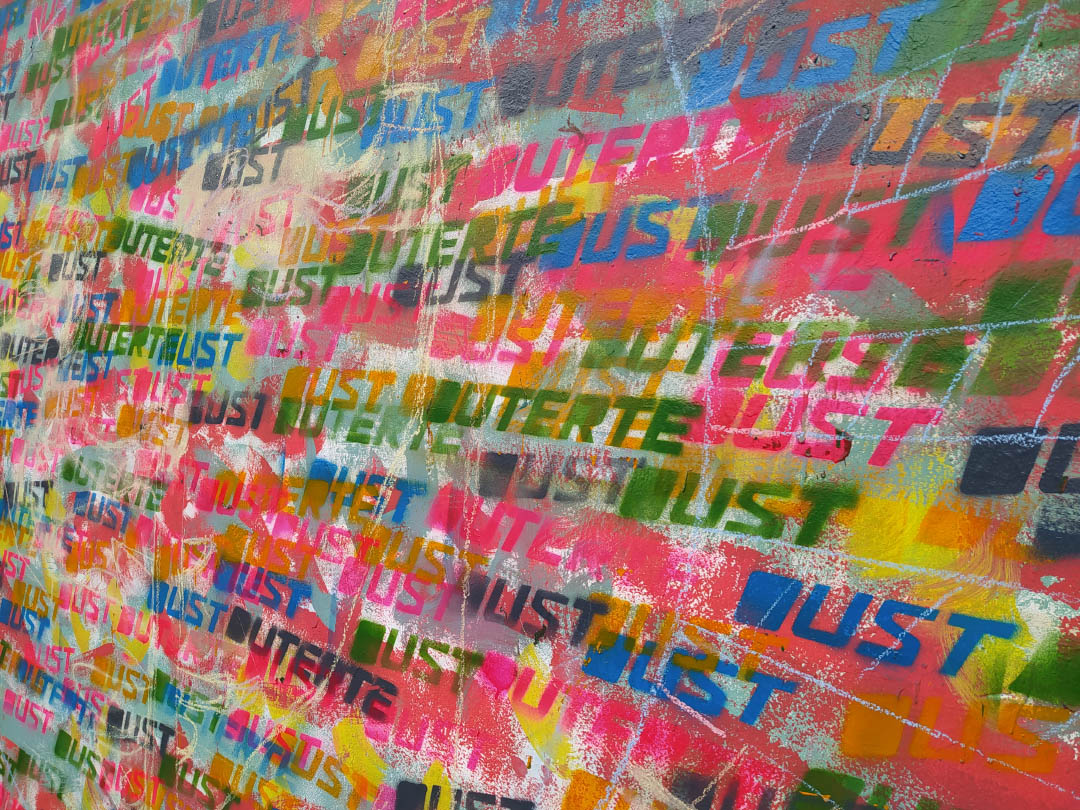 “Street texts and images, unlike official signage and monuments, are often encountered as palimpsests that facilitate a compounded view of overlaid concerns and sentiments. Our mural plays on this idea and situates the campaigns to Free the Artists and Defend Freedom of Expression within the broader yearning for systemic change as embodied by the call to oust the fascist regime of Duterte,” Antares Gomez Bartolome, CAP head of research and education, said in an interview.

One of the more intriguing murals accentuated the faces of slain farmers as stencil background. At the foreground are graffitied faces of Duterte and killed and tortured peasant leader Randall Echanis. But whereas cuss words and a dick adorned the president’s face, poetry was scribbled all over Echanis’ face, ending with his own incendiary words, “Hinding-hindi ko kayo titigilan…” (I will not give up).

A couple of community-based artists spearheaded the work. Asked about what the various vandalisms on Duterte’s portrait meant, they chuckled and said, “It means that he’s really depressed.” One of the artists, Frances Abrido, said that it took him a week to prepare the stencils of slain farmers—even so, they only represented a fraction of the more than 300 who have been killed for the past four and a half years. Abrido gives art workshops among children in rural areas and has seen first-hand how militarization has traumatized entire communities. “We are painting on the streets so that these realities are reflected here. Of course, there are other spaces we can use such as online, but street murals do not choose its audience. They’re for anybody who happens to pass by.”

Meanwhile, sandwiched between the words “Pasismo Biguin” (Defeat Fascism) is an image of an Aeta with a readily aimed bow and arrow. Bannering the call to “Free Lumibao 4” in Tagalog and Alibata script, the mural is referring to the four Aetas arrested in the said sitio in San Marcelino, Zambales in the first “test” case of the controversial Anti-Terrorism Law.

The artist, Bryan John Gonzales, has spent a lot of time among indigenous communities in Central Luzon. They are also the usual subjects of his paintings. “The life of our indigenous peoples is very peaceful. It’s the kind of life that I also want for myself,” he said. But Gonzales notes how centuries of peace is shattered by government and private sector projects that encroach on indigenous land. He cites the expansion of New Clark City in Pampanga as the most glaring example. “It shocked me how much could change so quickly. I saw an entire mountain disappear in just a matter of months. I saw rivers diverted. This shameless destruction of the environment affects not just the Aetas, but the future generation of Filipinos as well,” he said.

The grandson of a farmer who “died without owning the land he tilled,” Gonzales started out doing surrealist art, until he realized that his works “lacked soul.” “It was as if I was only expressing myself, creating my own reality. Only the Aetas gave my works a true soul, a purpose,” he said.

A mural about choreographer Marlon Maldos of the cultural group Bansiwag Bohol portrays the young cultural worker in a joyous mid-jump, in stark contrast with the terrified painted faces of the farmworkers that surround him. At 25, Maldos was killed while riding a motorcycle last March 2020, at the height of the COVID-19 pandemic.

Wheatpaste art—or putting up images printed on paper using a gel or liquid adhesive—was the medium of choice for some murals, including one that featured urban poor heroes Carlito Badion (extrajudicially killed last year), Carmen “Nanay Mameng”, and Estrelieta “Ka Inday” Bagasbas. Some murals exhibited a manga-inspired (Japanese comic) style that is particularly popular among the youth. This included a modern rendition of Carlos V. Francisco’s Bonifacio Mural.

The mural painting session itself was an assertion of presence—of people unafraid to be there, on the sidewalk, putting brush to wall to posit hard truths in broad daylight. As if trying to help an amorphous social movement paint its presence: “We are here. We are still here.” The murals, in their making and content, assert the presence of that which is primarily absent: freedom.

When asked why so many people had flocked the activity, Suarez put it quite well. “Artists know that their freedom to create the art that they wish to is premised on the freedom of expression. When this freedom is taken away, so is their freedom to create art. And they create art to serve the basic sectors, because we basically owe everything to farmers and workers—what we eat, the things that we use everyday. When they are suppressed, then everything else is rendered meaningless.”