A year of mourning, yearning for justice for the Kananga 3

“Leonard’s family and the public continue to thirst for justice in the face of the turtle-pace investigation. It angers us that already a year has passed and still not a single word or action can be felt from the Aquino administration.” – Dr. Giovanni Tapang, convenor of the Justice for Leonard Co Movement.

MANILA – Friends, colleagues and the family of slain botanist Leonard Co held a picket at the Department of Justice (DOJ) on Nov. 15, Tuesday as they mark the first death anniversary of the renowned botanist and his two companions, Julius Borromeo, a farmer and Soforonio Cortez, a forest guard.

The 50-year old Cortez worked as a forest guard and a regular employee of the EDC for the past 26 years. He left behind his wife, Arsenia, and three children.

A farmer, Borromeo was the only breadwinner and the father of six. He was among the contractual guides hired for Co’s five-day fieldwork.

“Leonard’s family and the public continue to thirst for justice in the face of the turtle-pace investigation. It angers us that already a year has passed and still not a single word or action can be felt from the Aquino administration,” said Dr. Giovanni Tapang, convenor of the Justice for Leonard Co Movement. 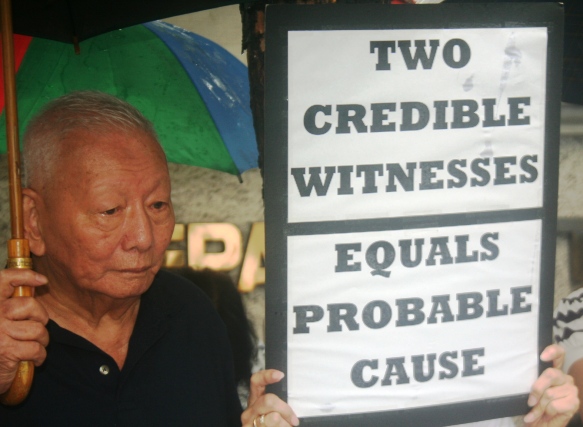 “It is my son who got killed. What we want is justice,” said Lian Seng Co, father of Leonard Co.(Photo by Anne Marxze D. Umil / Bulatlat.com)

On Nov. 15, 2010, Co, Borromeo and Cortez were gunned down inside the compound of the Energy Development Corporation (EDC) in Kananga, Leyte allegedly by elements of the 19th Infantry Battalion (IB) Philippine Army. Co’s group was working on a research for EDC when soldiers fired at his team. According to the military there was an encounter with the New People’s Army. But evidences and the statements of surviving witnesses Ronino Gibe and Policarpio Balute (part of Co’s team) reveal that there was no other armed group in the area aside from the soldiers of the 19th IB.

Co was cremated on November 23 in Quezon City; part of his ashes were scattered over a dita tree in UP and in Palanan, Isabela. Borromeo and Cortez were laid to rest by their families on November 25, in Leyte.

On January 26, 2011, Co’s family led by his widow Glenda, widow of Co, filed murder charges at the DOJ against members of the 19th IB. The accused soldiers numbering 38 in all were all present during the massacre; among those named as respondents are a two junior officers, 1Lt. Ronald Odchimar and 2Lt. Cameron Perez.

Earlier that same month, the DOJ and National Bureau of Investigation’s (NBI) own fact-finding team released its report, which cleared the 19th IB in the killing. On January 26, Co’s family protested against the DOJ report and filed formal criminal charges of murder against the 19th IB, seeking a formal preliminary investigation.

On February 22, 100 days after the killing, the Justice for Leonard Co Movement picketed the DOJ and called on DOJ Secretary De Lima to replace the head of its investigating panel, who was also part of the original DOJ-NBI team. Both the CHR and the DOJ have conducted more hearings since then, but neither agencies have released their conclusive reports to date. 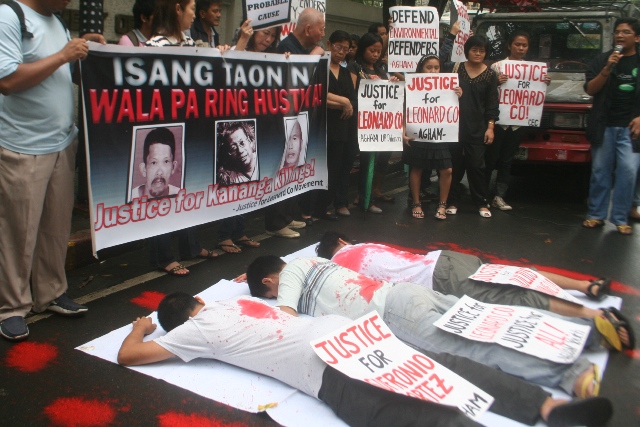 The group criticized President Benigno S. Aquino III for his continuing silence on the killings of Co and his group.

“If it’s true that the President is taking the straight path, then the perpetrators should be in jail by now. But one year has passed and still he is silent on Co’s death,” Tapang said . He said Aquino’s inaction perpetrates the culture of impunity that reigned in the country since the past administrations. “It makes him no different from the regimes that preceded him,” Tapang added.

“If he can talk about Manny Pacquiao’s victory, how can he not talk about Leonard’s case?” Tapang said.

“A climate of impunity reigns under the Aquino government,” Renato Reyes Jr. of Bayan said. “Credible evidence, including spent shells found near the bodies of the three victims, point to the AFP as the culprits for the deaths of the botanist and his aides. These shells match the firearms that were submitted by the AFP for ballistic examination. The entire process of accountability however has been slow, despite the evidence and testimonies by the survivor as well as experts,” Reyes added.

An independent fact-finding mission (FFM) was conducted from November 26 to 28, 2010 to establish facts and gather related information. In a press conference on December 8, 2010, the FFM team concluded that there was no indication of any crossfire and recommended specific actions for the government to further shed light and seek accountability for the killing.

The Justice for Leonard Co Movement, especially the victims’ families have also been waiting for the DOJ to act on the case they filed. Glenda, said, “They said that in one month’s time, after the ocular inspection, they will immediately come up with a recommendation if there is probable cause. But there has been no recommendation yet. Even the Commission on Human Rights (CHR), which conducted its own investigation, up to now, has not filed a report,” Glenda told Bulatlat.com in an interview.

“One year has passed up to now nothing has happened,” Glenda added.

Tapang called on the DOJ to “continue with the filing of murder against the members of the 19th Infantry Battalion for the killings of the Kananga 3.” He further asked the CHR to immediately release its findings to bolster the case against these soldiers.

“If Leonard, a renowned botanist in the country has not achieved justice, how much more would ordinary people wait for justice to be finally served?” Tapang said.