On its 18th year, Philippine Mining Act still reviled as a killing behemoth

“Corruption, violence, human rights violations, chilling disasters one after another –these are what Filipinos have suffered as a result of implementing the Mining Act of 1995.” – Bayan Muna Party Rep. Neri Colmenares

MANILA – Indigenous groups marked the 18th year of the Philippine Mining Act by marching to Mendiola Bridge Monday March 4 to demand the revocation of the law. With Bayan Muna Partylist Rep. Neri Colmenares, the groups declared that after 18 years, the country has had more than enough bases to call for the termination of the disastrous and killer mining law.

It is now high time, they said, to replace it with another mining law that would reorient the industry in order to utilize the country’s mineral wealth primarily toward Philippine industrialization. The groups also dismissed Aquino’s new mining policy, Executive Order No. 79, as just a ploy to defuse criticisms of the Mining Act. 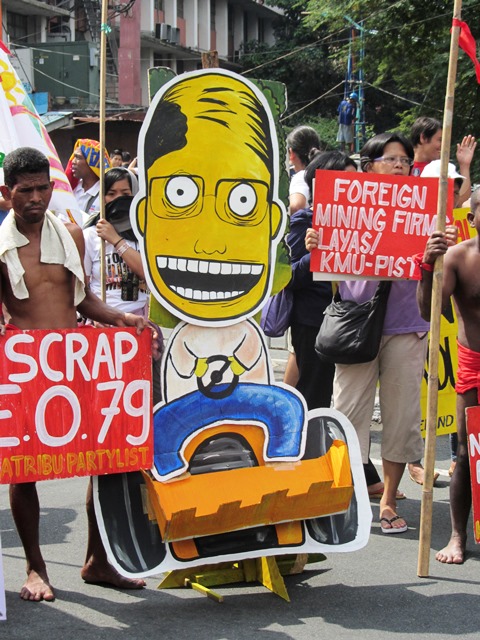 In a program at the Mendiola Bridge, Colmenares touted the Makabayan bloc of legislators’ proposed Peoples Mining Bill in Congress. He said that apart from seeking to make mining closely linked with industrialization – instead of the current law’s almost 100-percent export-oriented thrust – their proposed Peoples Mining Bill would seek also to rationalize mining to minimize environmental degradation. It would also respect the rights of those immediately affected. The opposite of it all are the hallmarks of the implementation of the Philippine Mining Act, as various groups noted over the years.

“Corruption, violence, human rights violations, chilling disasters one after another –these are what Filipinos have suffered as a result of implementing the Mining Act of 1995,” Colmenares said. He cited as example the revelations from last week’s inquiry into the massacre of anti-mining advocates in gold-rich Tampakan, South Cotabato.

In the inquiry, it was exposed that the Xstrata-controlled SMI has been giving the Philippine Army P900,000 ($21,950) per month or P10.8-million ($263.4 thousand) a year. It came out after Col. Marcos Flores mentioned a certain amount of monthly pay for CAFGUs coming from the mining company, which the mayor of Kiblawan, Marivic Diamante, quickly corrected by revealing the total monthly amount the army is receiving from SMI-Xstrata.

In an earlier statement, Colmenares shared that Mayor Diamante, a “rabid supporter” of SMI mining, revealed that SMI allocates P7,500.00 ($182) each to 120 CAFGUs for a total of P850,000 ($20,730) every month. “ On top of that the company pays the military regularly its gasoline allowance. “SMI-Xstrata officials is essentially a conspirator in the killing of the Capion family,” Colmenares concluded in disgust after the hearing last week in South Cotabato. 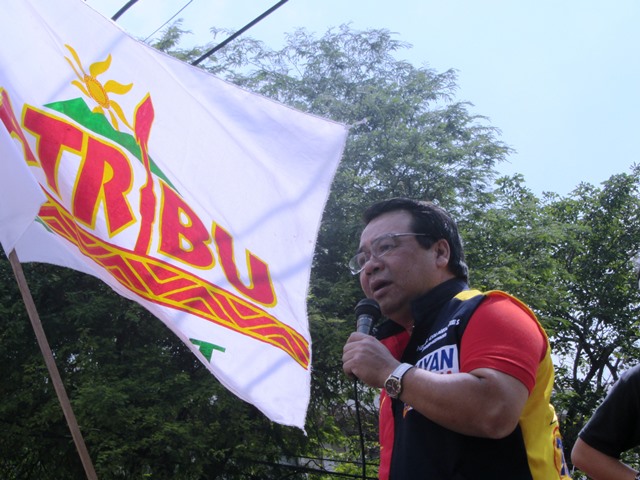 “That explains why the military doesn’t want mining to stop; because money will also stop.” Colmenares told Bulatlat.com. Among others, evidences in Tampakan massacre, site of the biggest mining site-to-be, pointed to the military’s strafing of the unarmed victims’ hut.

The military is not supposed to be receiving money from mining companies, Colmenares said, adding the national budget already has allocations for the military.

Similar military atrocities are decried by locals and indigenous peoples groups in other parts of the country hosting large-scale mining operations.

According to KATRIBU Partylist, roughly 60 percent of all approved mining applications in the country, which covers more than 1 million hectares, are in the ancestral lands of indigenous peoples. “This is an upfront to our existence as peoples. With all our lands being fenced off, dug up and scraped, our environment destroyed, we have no other option but to defend our lands and lives,” Tolentino declared.

Since the enactment of Mining Act, many indigenous peoples groups have been compelled to launch their own tribal defense system against the incursion of mining corporations. Last year, one pangayaw was declared in Mindanao against Xstrata-controlled SMI to defend the Blaan’s ancestral domain. The Philippine Army has allegedly killed four members of the family of the anti-Xstrata chieftain who led the pangayaw.

From Central Luzon, Edwin Danan 59, spokesperson of Central Luzon Aeta Association, said they joined Monday’s protest (against Mining Act) because they need also to bring to light their issue against mining.

Danan said the Aetas living in the mountains of Central Luzon have been pushed from one place to another in the mountains but now, they have nowhere else to go to. Lately their ancestral domain in Pampanga is being desired as mining site by at least two mining companies digging for gold and copper.

In 2006, Danan said “martial law arrived” in their communities through then Major General Jovito Palparan of the Philippine Army. “He deployed CAFGUS in the middle of Aeta communities in Pampanga. Leaders could not move around, they’re accused that they’re speaking the rebels’ doctrine. But, we told them, we are only doing what our ancestors have done before us. We are only defending our ancestral domain,” Danan explained.

The mining companies are still there in the area, and Danan said the threat of dislocation hangs huge over their heads. “We have moved before from one place to another. There are no more places for us to move and live but where we are now,” Danan said.

The Aquino government seems to ignore also the rights of indigenous peoples. According to Danan, contributing to the threat over their last piece of ancestral domain is the government’s plan to haul to Zambales some 50,000 relocatees from Manila, after their informal settlements were demolished. Danan told Bulatlat.com the government is offering these relocatees jobs in black sand mining in Zambales. The relocatees, he said, do not seem to be told that in being dumped in Aeta ancestral lands, they would be dislocating and threatening the survival of the Aetas. 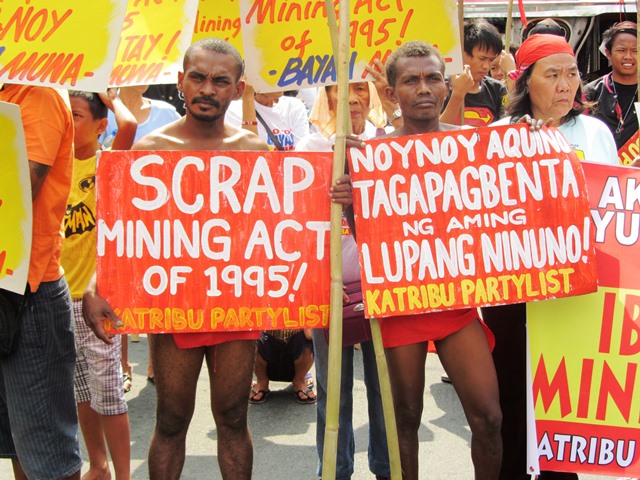 Many more cases reveal similar cavalier attitude over the rights and lives of indigenous peoples amid the Aquino government’s boasts of development projects.

Early this month, reports also mentioned heavy military deployment in the Cordillera Region while the government tries to get the Kalinga tribes’ Free Prior Informed Consent over a mining project. All over the Philippines, military deployment and operation, according to green groups and indigenous peoples groups, descend on communities like an “inseparable twin.”

Last December’s Human Rights Day in Manila was marked with a delegation of tribespeople from Mindanao who brought surreal stories of lives spent on the run as mining operations and military operations descend on their communities and try to shoo them away.

On the 18th year of the Mining Act of 1995, Karapatan-Alliance for the Advancement of People’s Rights called for the immediate scrapping of this law saying “it is a direct assault on our sovereignty and patrimony as it emasculates our rights as a people,” said Cristina Palabay, secretary general of Karapatan. She emphasized that most of the human rights violations that they have documented, especially in Mindanao, are related to big foreign businesses engaged in large-scale mining.

“These mining companies often hire goons, finance the AFP and its paramilitary groups to eliminate opposition and pave the way for mining operations. Their connivance is a perfect combination for human rights violations against the people, especially those who are opposed to plunder by these transnational corporations,” Palabay said.

As Aquino enters the second half of his term, members of indigenous peoples partylist group Katribu said at least 33 of their fellow tribes people have been extra-judicially killed. The killings, Katribu said, tend to eliminate the leaders visible in the frontlines of resistance against development projects such as large-scale mining.

After 18 years, “The regimes that implemented the Mining Act of 1995 are accountable for grave human rights violations,” Palabay of Karapatan said. The Aquino regime is “equally responsible for the intensification of these violations such as the extrajudicial killings, forced evacuations, and for strengthening the law, despite the opportunity to junk it,” Palabay added.

Karapatan reiterates its call to pull out military troops in communities, dismantle paramilitary groups such as the CAFGU and the Special Civilian Armed Auxiliary (SCAA). It echoed the calls of other people’s organizations to junk the Mining Act of 1995.

“Mining espoused by the Mining Act of 1995 and the Aquino government is an ongoing war against the people,” Kakay Tolentino, secretary general of Katribu Partylist said. She asked the public to support the indigenous peoples’ determined resistance against mining plunder and environmental destruction.