They bring with them an urgent call as their communities continue to face the threats of large-scale mining and militarization.

MANILA – “Why come here? No matter what you say, they will not listen to you!” a young man angrily told the delegates of Manilakbayan from Mindanao as its members formed a picket at the entrance of the Chamber of Mines in Pasig early Tuesday afternoon. This man was furious at the picket’s temporary occupation of the driveway, just when he had wanted to drive his car right up to the building’s entrance. He threatened the rallyists and even angrily swiped at this reporter’s camera.

His actions underscored the plight of the Mindanaoans who arrived in Manila for a 10-day ‘Manilakbayan’ aiming to defend their rights, land and environment. Early that day, the delegates had trooped to the Manila headquarters of Australian Xstrata and Canadian TVI, two of the largest mining companies operating in Mindanao with growing profits and record of human rights violations. 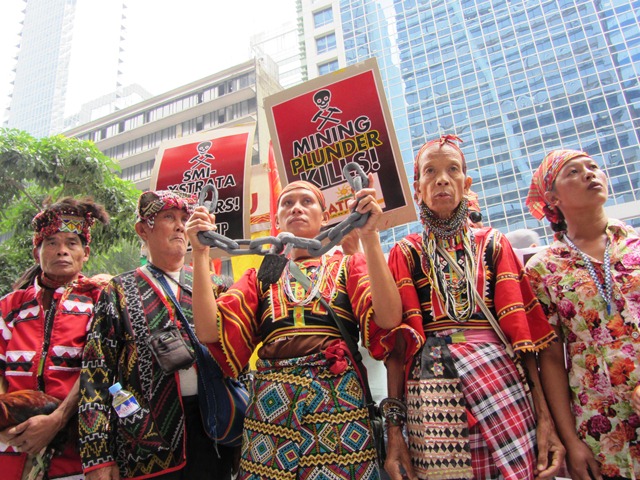 The protesters had said before, in the aftermath of past super-typhoons such as Sendong, how typhoons like these are becoming deadlier and more disastrous precisely because of the large-scale logging and mining operations. These, they said late last year, are stripping off their natural environmental protection from the effects of typhoons. But months after Sendong, the Aquino government only responded with a new mining policy seen as further invitations to these large-scale mining operations.

Aquino also deployed more soldiers to secure large mining operations. This week, as Pablo started lashing parts of Mindanao especially the most heavily mined areas, the government boasted of its “preparedness,” which so far consisted largely of “preemptive evacuation” and release of immediate relief and supplies.

In facing Pablo’s onslaught, the government ignores the contributions to the unfolding disaster of large-scale mining operations and denudation of erstwhile forests to make way for huge plantations, as the delegates of Manilakbayan have come to the capital to expose.

Days before typhoon Pablo made landfall, the Kalikasan Peoples’ Network had asked the government to suspend mining operations during typhoons at the very least, in the hope that this would reduce the foreseen damages. However, Mines and Geosciences Bureau Director Leo Jasareno blamed small-scale miners such as those in Pantukan, Compostela Valley and remained deaf to the calls against large-scale mining. Large mining corporations, with state forces’ protection, have long sought to supplant these small-scale miners in the gold-rich area.

“It is ironic that Mindanao is considered the food basket, the wellspring of many natural, mineral and aquatic resources; but it is also the most neglected in terms of services, as its resources are plundered by foreign multinational corporations in cahoots with the government,” Matutina said. 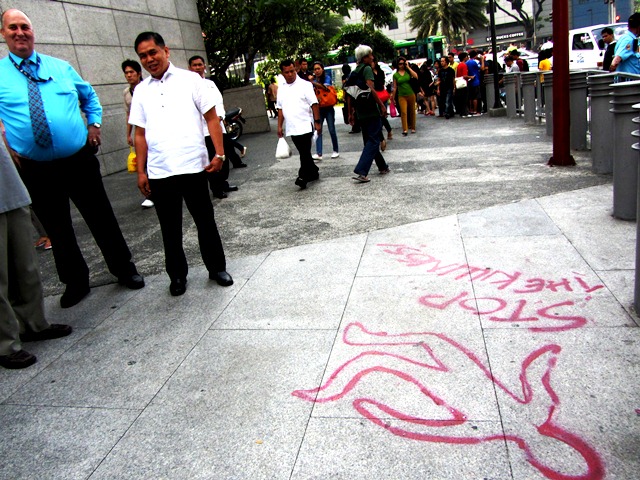 An expat and a security personnel of RCBC Tower in Makati view the ‘Stop the Killings’ painted by Manilakbayan delegates during their picket in front of Canadian and Australian embassies. (Photo by Marya Salamat / bulatlat.com)

This Tuesday (Dec 3) the delegates of Manilakbayan, supported by Manila-based green groups under the Kalikasan Peoples Network for the Environment (Kalikasan-PNE), drove a caravan and held pickets in front of the headquarters of the biggest mining corporations operating in Mindanao. They tried to bring to these companies’ doorsteps the images and stories of its crimes. These include not just environmental disasters but also the rising incidences of killings and militarization that for the common people of Mindanao have accompanied increased mining operations.

In front of the headquarters of Australian Xstrata, the world’s fourth biggest copper mining corporation, and also of the Canadian Toronto Ventures Inc (TVI) and the building where Australian and Canadian embassies hold office in Ayala, Makati City, the delegates of Manilakbayan brought “closure orders.” They brought it also at the Chamber of Mines and NADECOR in Pasig.

They spray-painted the pavement leading to the said mining companies’ offices, embassies of their home countries, and the Chamber of Mines, with their immediate demand to “Stop the Killings,” along with a marking similar to chalk illustrations of where and how a murder victim was found.

After a brief program where they called to task the mining companies such as Xstrata and TVI for using state forces to drive them away from their ancestral lands, for poisoning their waters and lands with their mine operations, for killing their leaders and their families, the delegates of the Manilakbayan were soon forced to stop the program by the security of the mining offices, the police and in Makati, also by a truckload of soldiers deployed at Ayala Avenue near the protesters’ caravan.

Aside from being rich in resources, Mindanao is also “one of the most bloodied places” since the Aquino administration took the helm mid-2010. For defending their land and environment, 35 community leaders had been killed in Mindanao under Aquino, according to Manilakbayan. 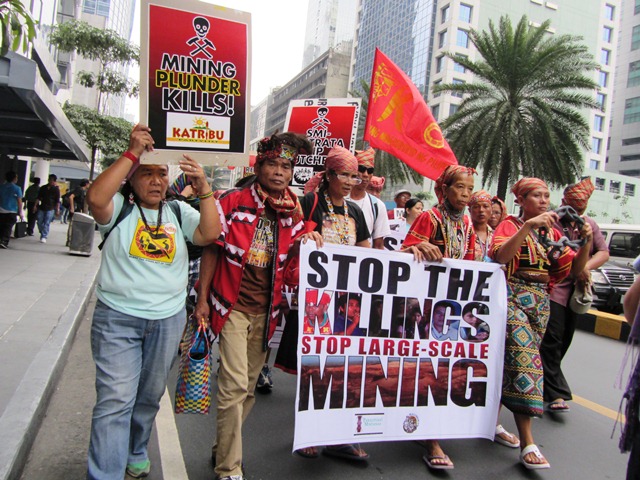 Manilakbayan march at Ayala Ave. in Makati, from Xstrata HQ to Canadian and Australian Embassies. (Photo by Marya Salamat / bulatlat.com)

They are already being displaced from their lands, even prior to “preemptive evacuation” and additional ravages of typhoons that affect heavily mined areas much more brutally. More than 1,000 families have been displaced in Mindanao to give way to large mining companies’ operations; more leaders have been harassed, targeted for assassination, slapped with “false charges” in courts. The OSB nun Matutina said all these are being done “to silence us.”

In the Bong Mal community of the Blaan tribe in Tampakan, South Cotabato, Erita Capion, 29, told Bulatlat.com that there are seven military detachments. State forces “follow the movements of the locals, arresting some of them and charging them with false crimes, especially those among us who have big lands in the area.” Capion said the lands where they live are the same lands in which the Xstrata-SMI wanted to do open pit mining.

“Even if you fear them they would kill you just the same,” she said, so, she reasoned, she might as well brave her fate. If bullets are fired at them and it happens to hit her, then that is that, she said. She is the sister of tribal warrior Daguil Capion whose pregnant wife Juvy and two other children were brutally murdered by soldiers belonging to the 27th IB, the same ones believed to be securing the operations of Xstrata-SMI. She is one of the delegates of Manilakbayan.

What they are all fighting for now apparently goes beyond defending their ancestral domain. The water going down to Sarangani and Davao del Sur springs from where their tribe now lives, said Capion. It is the same water sources estimated to be depleted or poisoned with Xstrata-SMI’s operations.

In Zamboanga Peninsula, the Canadian firm Toronto Ventures Inc. (TVI) is wreaking havoc on the lives of the Subanen people, Dulphing Ogan, secretary-general of Kalumaran, said in a statement.

TVI’s operation is the biggest in the area. Alvin Cardoza, 18, a Panalipdan youth, said the effects of the mining companies’ operations are getting worse. He cited the unprecedented depth and extent of flooding suffered in the peninsula recently; the hundreds of indigenous peoples forcibly driven away from their lands which are claimed to be part of TVI’s government-approved and secured mining area.

Entering this mining area, such as the Zamboanga Sibugay, requires several gate passes as numerous paramilitary groups guarding demand for it. Panalipdan conducted a fact-finding mission there after the attempted murder of a tribal leader ended in the death of this leader’s son.

OSB nun Stella Matutina described the Mindanao people’s thirst for justice and their attempt to bring it to the heart of the Manila government through Manilakbayan as “a historic moment” for the Lumad (Mindanao indigenous peoples), Moro people, green groups and human rights defenders. 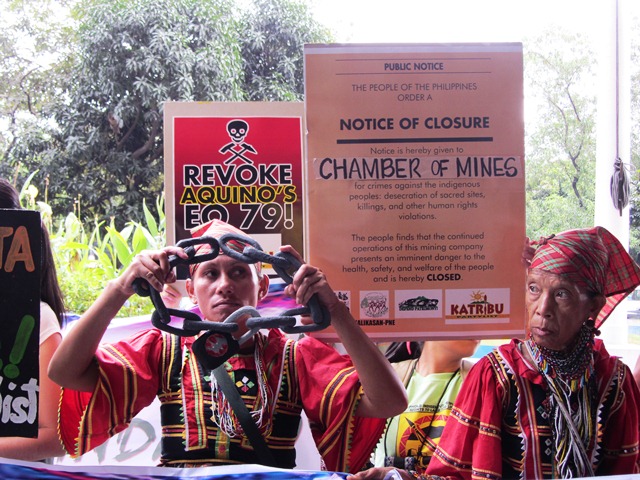 Mindanaoans and green groups bring this ‘notice of closure’ to Chamber of Mines and headquarters of some mining TNCs, Dec 3, 2012. (Photo by Marya Salamat / bulatlat.com)

They bring with them an urgent call as their communities continue to face the threats of large-scale mining and militarization. “We come with our rage for justice, for our leaders who have been slain, and for our communities that face these threats,” said Matutina.

They hope to bring their plight to Manila institutions, the schools, churches, Congress and, they hoped, Malacañang. They put the final blame for these killings and environmental destruction on the government, “the perpetrator of this mining liberalization given a big push by Aquino’s Oplan Bayanihan.”

They urge the people to support their calls: to join them in putting an end to the killings, ‘large-scale mining plunder,’ Mining Executive Order No. 79 and the Mining Act of 1995, disbanding paramilitary groups and putting an end to deployment of military members in communities.